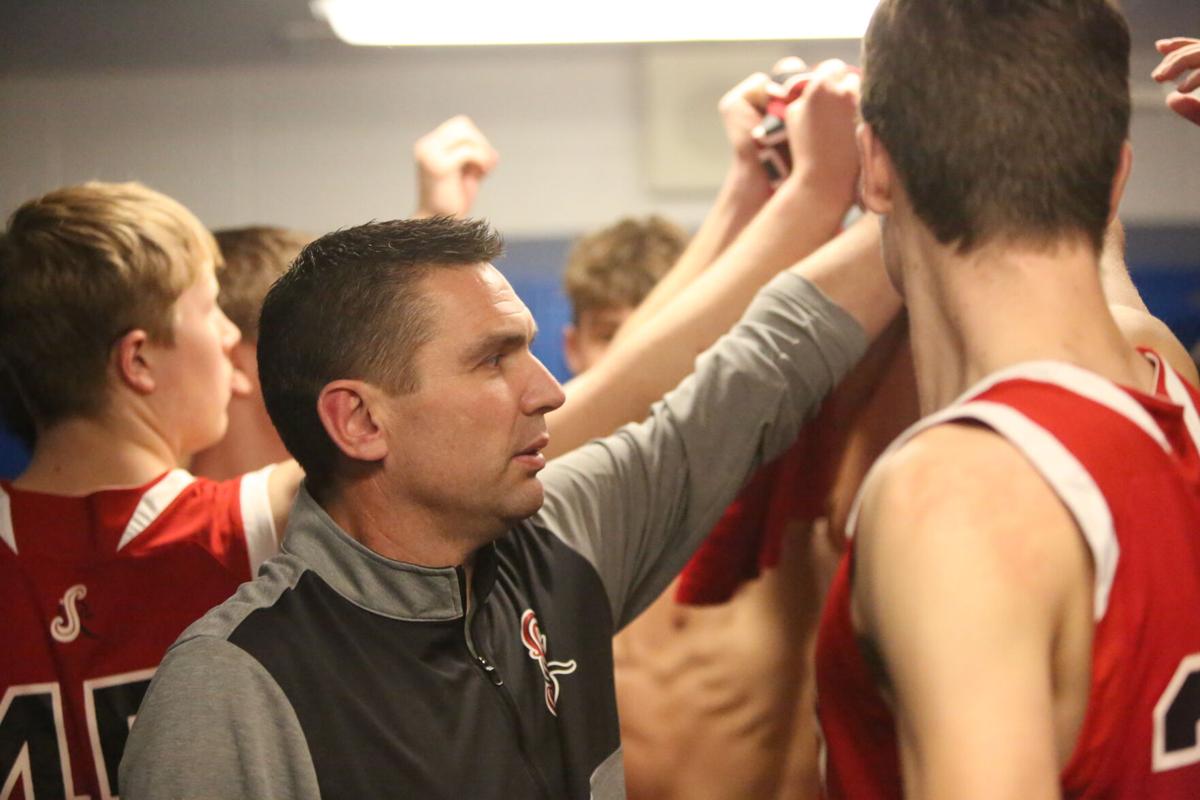 Southridge coach Kyle Swafford brings it in in the visiting locker room Saturday after his Raiders edged Northeast Dubois, 50-48, in double overtime. 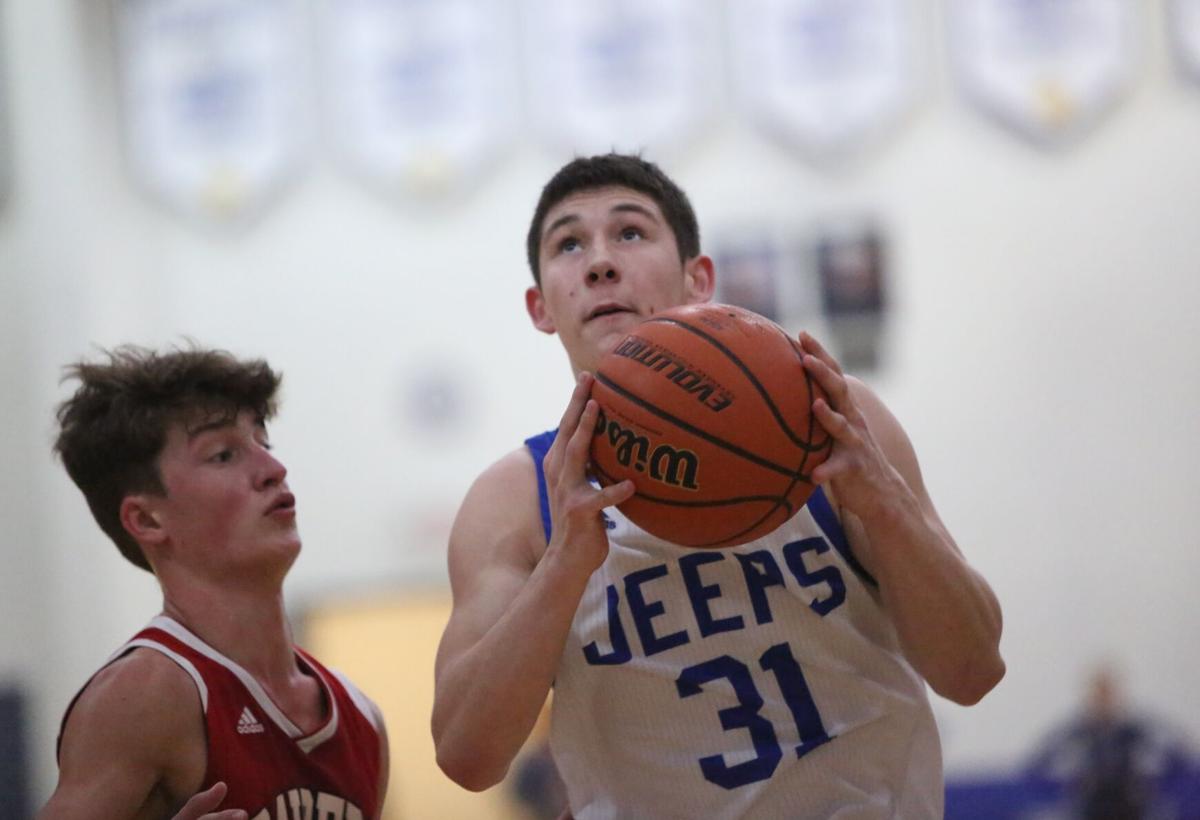 Northeast Dubois junior Colby Lockard (31) goes for a bucket Saturday night against Southridge as fellow junior Collin Tooley (2) readies to defend for the Raiders. The Jeeps dropped a 50-48 loss in double overtime.

Southridge coach Kyle Swafford brings it in in the visiting locker room Saturday after his Raiders edged Northeast Dubois, 50-48, in double overtime.

Northeast Dubois junior Colby Lockard (31) goes for a bucket Saturday night against Southridge as fellow junior Collin Tooley (2) readies to defend for the Raiders. The Jeeps dropped a 50-48 loss in double overtime.

DUBOIS — Southridge's 50-48 win in Saturday's double overtime thriller at Northeast Dubois featured two teams with a record under .500 heading into the game, but what unfolded was an essence that encapsulated basketball in Dubois County at its very finest.

Fans of both teams packed the stands, as one might expect for a county rival game, and awaited their next reaction with bated breath. They clung onto every play, every possession, jeering and chirping when a call didn't go their way — or some screaming at the top of their lungs in an uproar over every time their team did something big - whether it was pulling closer, tying or taking the lead.

It might beg the question of how people didn't blow the roof off, but pure ecstasy and jubilation awaited the winner of this game.

The Raiders (6-6) didn't look like they were going to be that team, certainly not after trailing Northeast Dubois, 26-14, at halftime. The Jeeps (3-8) had an 8-0 run at one point in the first quarter, and Southridge relied heavily on perimeter shooting to deliver the scoring in the first half. Twelve of their 14 opening half points came from downtown, while Northeast Dubois flaunted its length to block many Raider shots throughout the night, but especially through the first two quarters.

"I challenged them at halftime," Raiders coach Kyle Swafford said. "Because I thought we were on our heels and I thought Northeast Dubois did a really good job at attacking us and being really aggressive on us, and it kind of got us shellshocked, I think."

"We were kind of down in the dumps there for a second," said senior Carter Whitehead, who tied for a game-high 17 points. "We got punched in the mouth in that first half, and we had to start trusting in each other there towards the end, and that's what we did. We came out and we had to grind it out. We were just plain getting outworked that first half, and we came out and we made a statement — cut that lead down."

The Raiders gradually crawled back into the game during the third quarter, even as Jeeps junior Peyton Betz made it 28-18 with a bucket. Southridge chipped away, fed more men inside and found senior Hunter Eckert for a layup at the buzzer that reduced Northeast Dubois to a 31-26 lead after three.

The Jeeps still held to a small lead, but when junior Gaige Schepers missed two free throws with 5:13 to play in regulation, there was Whitehead for the tying 3-pointer on the other end of the floor, 33-33. The two teams struggled to points on the board for the rest of regulation, but Northeast Dubois sophomore Grant Goller made one of two free throws for a 36-36 game in the final minute of the fourth, with that being the score after regulation.

Northeast Dubois was the first to unbreak the tie in the opening overtime after senior Colby Pieper scored off an offensive rebound, 38-36. The Jeeps led, 41-38, before Raiders senior Fernando Hernandez made a layup under the basket to pull his team within one.

All Northeast Dubois had to do was hang on with less than 20 seconds on the game clock, and it could revel in a hard-fought win. Instead, Betz a free throw with 18.6 seconds left opened the door to a Southridge rebound and Whitehead possessing the ball and driving for a layup — another clutch, game-tying bucket.

But he still wasn't done. Pieper gave the Jeeps 48-46 lead by making two free throws with 57.8 seconds left in the second overtime. Whitehead, though, garnered himself an and-one, making his free throw for a 49-48 Southridge lead with 44.6 seconds to spare.

"I was just playing basketball," Whitehead said. "I knew if I drove in the lane, it was going to open up a lot of things for my teammates...We were going to make something happen either way."

Southridge could not exhale, though, until it held the lead with nothing but zeroes on the clock. Junior Ty Kalb tried to win it for Northeast Dubois from beyond the arc at the buzzer of double overtime, and when that didn't fall, Kalb was visibly sunken, and celebration time began for the Raiders.

Northeast Dubois coach Terry Friedman could not be reached for comment after the game, and the Jeeps will try to get back on track Friday at Paoli.

Meanwhile, the Raiders knew what it was like to be on the other side of an overtime game after a 61-51 OT loss the night before at Tecumseh. They're set for another back-to-back weekend, being scheduled to play Mt. Vernon Friday at home, then Jan. 15 at Princeton in a pair of Pocket Athletic Conference games.

While this was a big win, Swafford noted it'd be hard to say it could be a season-changing one for Southridge.

"It does give us some momentum going into next week," he said. "You need this motivation because in January, it's dark when we get to school, it's dark when we leave practice, it's a long month. These kids need some bright spots, so this is a great momentum going into next week — where we've got another doubleheader. But it's hard to predict how it's going to look moving forward."