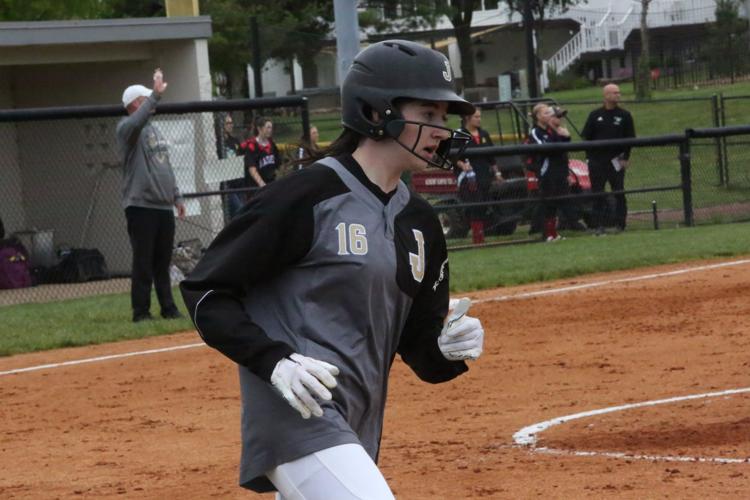 Above: Freshman Carlee Rogers (16) has found her way into Jasper’s softball lineup this season, producing at the plate for the Wildcats with a team-best .429 batting average. Below: Freshman Olivia Young (11) is learning her way, having to take over as Jasper’s softball catcher after senior Kennedy Matheis is dealing with a problem in her hand that sidelined her after the opening games this season. 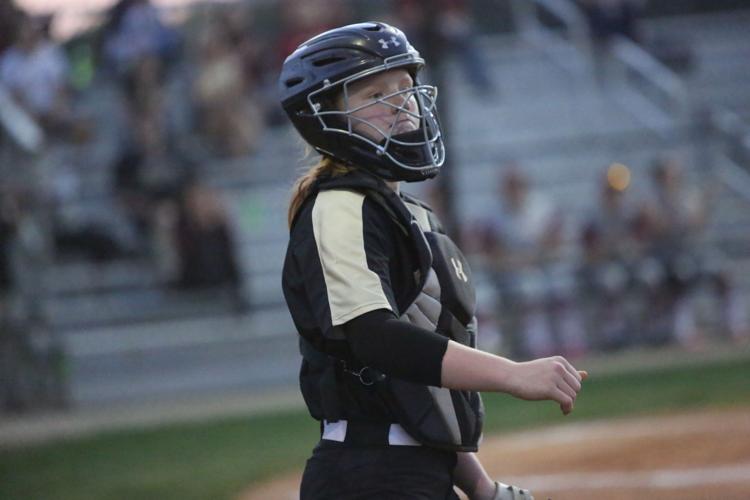 Freshman Olivia Young (11) is learning her way, having to take over as Jasper's softball catcher after senior Kennedy Matheis is dealing with a problem in her hand that sidelined her after the opening games this season.

Above: Freshman Carlee Rogers (16) has found her way into Jasper’s softball lineup this season, producing at the plate for the Wildcats with a team-best .429 batting average. Below: Freshman Olivia Young (11) is learning her way, having to take over as Jasper’s softball catcher after senior Kennedy Matheis is dealing with a problem in her hand that sidelined her after the opening games this season.

Freshman Olivia Young (11) is learning her way, having to take over as Jasper's softball catcher after senior Kennedy Matheis is dealing with a problem in her hand that sidelined her after the opening games this season.

JASPER — The six Jasper softball seniors have done much for the program, doing their part to keep things moving along.

But with their playing days soon to end, regardless of how far they go, others will need to help carry on and move things forward. And freshmen Carlee Rogers and Olivia Young are two of the pieces doing their part to ensure just that.

Rogers swinging hot batThere might be a way to figure out Rogers, but she’s off to a very nice start to her high school career, posting a team-best .429 batting average.

She’d been on the varsity roster towards the beginning of the year, but she also had players in front of her. Soon, though, she got her opportunity, and now, opposing teams have to account for her in addition to same of the veteran bats in the lineup.

“I pinch hit for (senior) Adrienne (Simmers) a couple times, and then I eventually moved up,” Rogers said.

“She got the opportunity based on her JV numbers,” Wildcats coach Matt Pryor said. “And that’s what great about having a JV program that you get to give these girls opportunities to prove themselves, and she definitely did that.”

Pryor noted the program had Rogers on their radar since seeing her in middle school, and praised her athleticism, having also made an impact for Jasper in girls basketball this season. He lauded how Rogers appears not to stress over things, and that her athleticism plus a free spirit at the plate has made way for some early success.

However, Rogers told The Herald that it can be scary, but she’s made the most of it.

“The varsity team has really done a good job to support me and be behind me all the time,” she said. “And I’ve just fed off of their energy.”

She’s made adjustments thus far like choking up on the bat or scooting up when inside the batter’s box. Her approach is to be aggressive because she can’t just watch strikes go by. She has to be swinging, even if the strike zone isn’t what she would like it to be. If low pitches are being called, then she sees it upon herself to swing.

Rogers also showed Saturday that she can have some power in that bat, launching her first varsity home run against Forest Park — jumpstarting a rally that helped turn a 4-1 deficit prior to homer into a 7-4 victory.

“I actually didn’t even know it was going over until it hit the bleachers,” Rogers said. “But it was really exciting and I hope I can hit many more.”

Young filling big shoes early in careerNot only does Jasper have six seniors, but all six earned their way into the Wildcats’ lineup. That was, however, until catcher Kennedy Matheis injury on her right hand has forced to miss almost the entirety of her senior season.

“I had broke my radius during basketball season,” Matheis said. “So, it was from a snowboarding accident — so it was not a good thing.”

During a practice, she had a complication due to the previous fracture, having played just some of the earliest games of the season.

“She’s been my role model since Day One in catching,” Young said. “I’ve always looked up to her, and seeing her hurt really made an impact on the team.”

Suddenly, Jasper had to find somebody to work behind the plate, and the Wildcats held a competition, which Young won, getting to fill in for one of her influences on the field.

“She’s got a very quick snap and release,” said Pryor, who also hailed the accuracy of Young’s throws.

Matheis’ senior softball experience may be different than what she’d envisioned going into the season, but she’s still playing a large role by serving as a mentor to Young.

“It is tough not be able to play, especially my senior year with my team,” Matheis said. “But it’s also rewarding in the sense where I get to help Olivia and I get to see her succeed and the team succeed. It’s more of seeing both the player and coach’s perspective. So, it’s different, but it’s still a lot of fun. And I enjoy the role.”

“Every time I come into the dugout, she always has something to tell me to work on and help improve my game and everyone else’s game,” Young said.

“We call her Coach Matheis now,” said Pryor, allowing the Kentucky Wesleyan College softball signee to give her thoughts at the end of games. “...You try to find the blessing in difficult situations, and she certainly is — she’s seeing the game on our side now. So, that’s only to help her grow as a player, too, when she goes up to Kentucky.”

Another challenge that Young has had to endure with catching is the pitching staff she’s had to work with.

The Wildcats had Olivia Knies as their pitcher all four years when she was in high school, and Mia Werner was the team’s pitcher from her freshman until her senior year, too.

But not only does Young have an important responsibility of being the team’s catcher, she’s having to work with a couple of arms in sophomore Elise Lampert and senior Kylie Morton.

“It’s definitely different for each of them,” Young said. “Kylie has more pitches and Elise has faster pitches. So, it just depends on what team you’re facing on which one you want to put out there.”

“She’s definitely become a lot more confident out there behind the plate,” Matheis said. “She’s very confident in her position and gets her job done.”

Carrying the Wildcats forward this year and beyond

Young and Rogers are two key pieces to the Wildcats (14-7) this season, having earned their way into prominent roles, with opportunities to grow for the next three seasons beyond this one.

“Me and Olivia, we both just chatter back and forth about how it’s really exciting and we love being up here,” Rogers said. “We love the experience and we’re just glad to be up there.”

“Carlee and I have been playing since we were really little kids in rec league,” Young said. “And it definitely makes it better to play with another freshman on the team and someone to look to, and you really need someone to talk to.”

The two of them both feel like they’ve grown up quickly this spring, and are hoping to pass the knowledge they’ve gained onto incoming players. But for now, Jasper is gearing for another postseason run. The Wildcats have won eight sectional championships in program history, making it to the sectional championship game in 2021, but losing to Gibson Southern, a team they need not concern themselves with in this year’s sectional tournament, given that they’re in different sectionals.

And if the Wildcats are to win a ninth sectional championship in 2022, both Rogers and Young will have been important in making that happen.

“If Jasper can bring home sectional from all the teams that are in that particular sectional, that’ll be pretty impressive,” Pryor said. “And they’ll play a big role in that.”

“I hope we can make it really far in postseason,” Rogers said. “We have been working really hard. So, I’m just excited for more to come.”