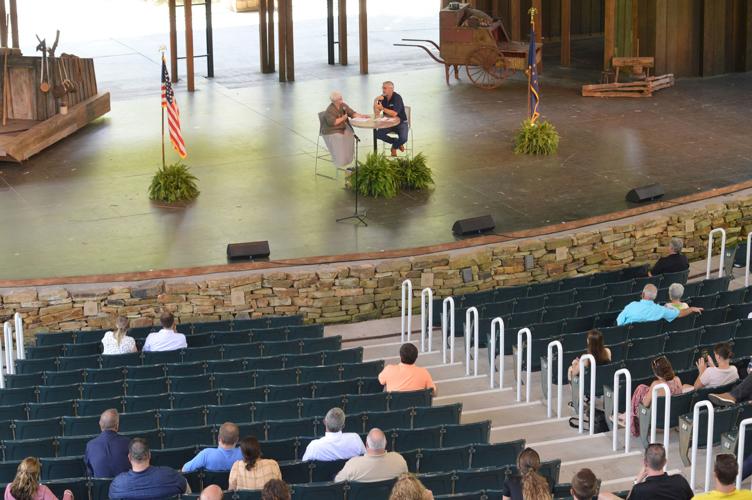 The question-and-answer style chat between Kathy Tretter and Gov. Eric Holcomb was held on the stage of the Lincoln Amphitheatre in the Lincoln State Park. 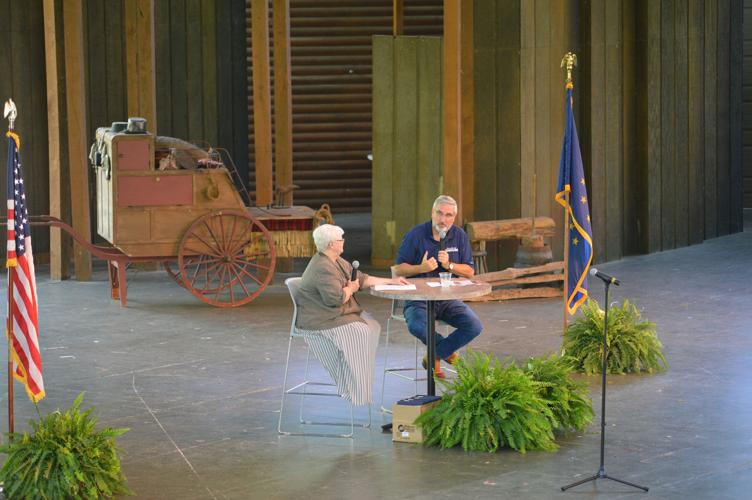 Topics that were discussed during the talk were the availability of housing and child care, the state’s biannual budget, the possibility of a Lincoln State Park inn and more. 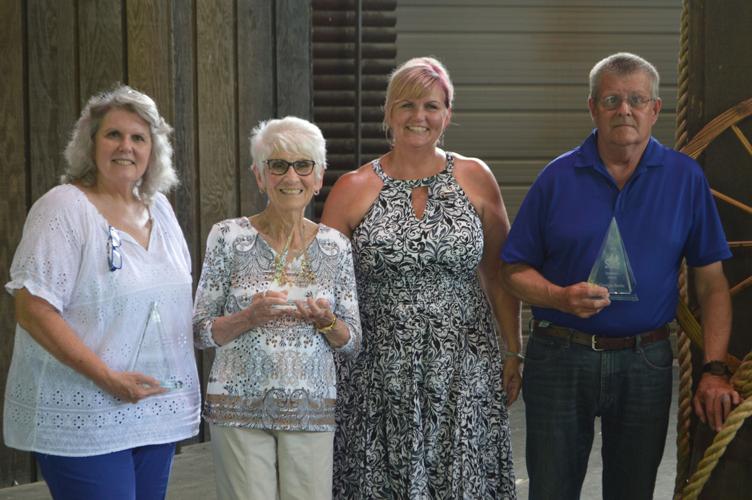 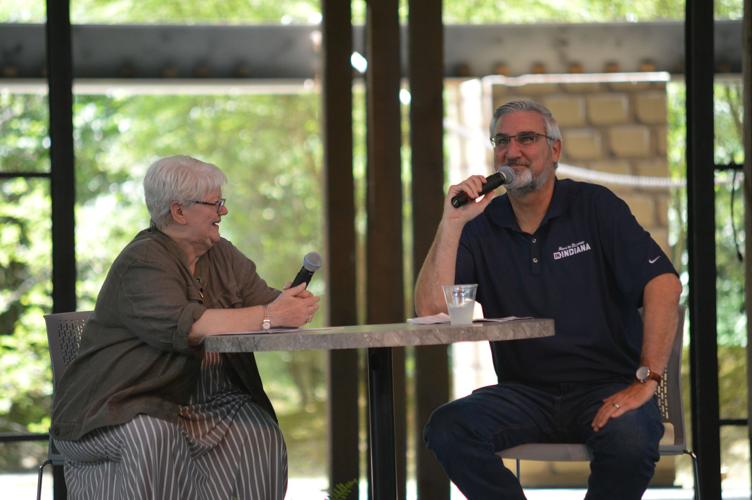 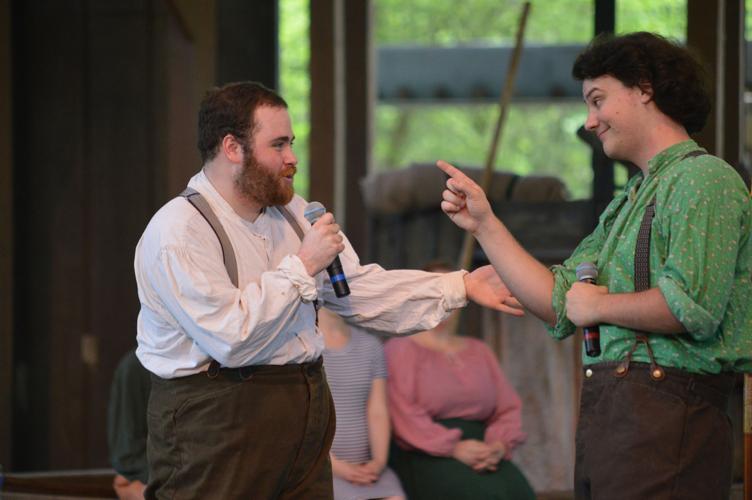 Cast members of the “Makin’ a Home on Pigeon Creek” musical gave a sneak peek of the show. 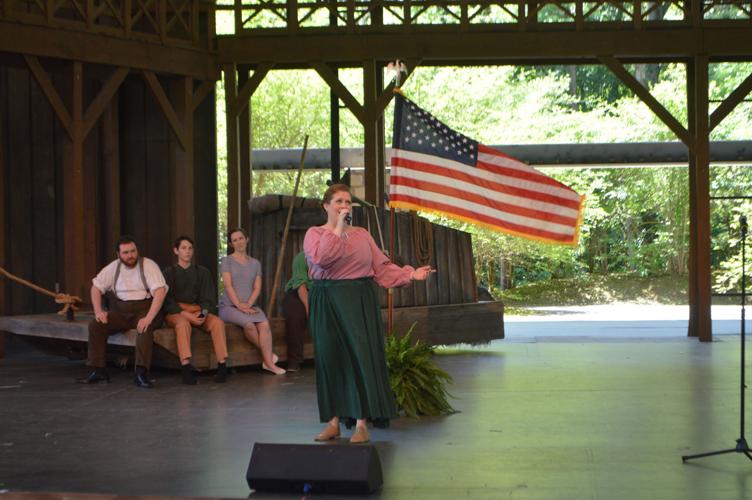 The American flag blows in the wind as a performer from the “Makin’ a Home on Pigeon Creek” musical sings.

The question-and-answer style chat between Kathy Tretter and Gov. Eric Holcomb was held on the stage of the Lincoln Amphitheatre in the Lincoln State Park.

Topics that were discussed during the talk were the availability of housing and child care, the state’s biannual budget, the possibility of a Lincoln State Park inn and more.

Cast members of the “Makin’ a Home on Pigeon Creek” musical gave a sneak peek of the show.

The American flag blows in the wind as a performer from the “Makin’ a Home on Pigeon Creek” musical sings.

LINCOLN CITY — The Governor of Indiana, Eric Holcomb, participated in a question and answer style chat during the Spencer County Regional Chamber of Commerce annual luncheon held on Thursday, June 16.

The luncheon was held at the Lincoln Amphitheatre and included a social hour, a lunch catered by Oink Inc., and a sneak peek performance of the Makin’ a Home on Pigeon Creek musical.

The announcer for the afternoon was JW Arnold. Arnold thanked each of the sponsors for the event and recognized the 2022 Spencer County Regional Chamber of Commerce board members.

Arnold welcomed the special guest for the afternoon and shared some facts and highlights from Governor Holcomb’s career. In 2020, Governor Holcomb was elected to his second term as Governor with the most votes for Gov. in Indiana history. Holcomb is a United State Navy veteran and a lifelong Hoosier. Holcomb previously served as the state’s 51st Lieutenant Governor.

Question one: Tretter asked what plans does he or the legislature have in mind for all these ordinary Hoosiers who are really suffering due to the nationwide economic failures Tretter believes are wrought by the double whammy of the pandemic and the war in Ukraine. Are there any potential solutions in light of the skyrocketing prices of gas and food?

Gov. Holcomb answered by stating the she brings up two aggravating factors. He added that there is also federal policy, the monetary rates, and other factors in addition to that fragile supply chain that’s been not just threatened but disrupted, depending on what sector you’re talking about.

The U.S. had a lot of printed cash thrown into the system because of the pandemic. Trillions and trillions of dollars printed out of thin air and put into a system, that wasn’t just a simple check, it was for months on end. So, that had a really pronounced impact on savings. But what’s really come home to Gov. Holcomb, and what the state have tried to stress is the ability to control the things they can control is of paramount importance.

He added that Indiana is in a very strong fiscal position. Everything is relative but Indiana is a low cost of living state going into the pandemic, going into the supply chain disruptions, and going into this current federal policy. What the state has sought to do is lessen that load.

Recently in the last short legislative session, there was an effort to cut taxes or eliminate the utility receipts tax, and cut personal income tax. To date, the state has added about $100 billion in a five year period.

Over a five year period, the state has paid down about 24% of its state debt.

Earlier this year, Indiana passed an Automatic Tax Payer Refund (ATR), a total amount $543 million, which equated about $125.00 per tax payer. Gov. Holcomb is pushing and working with the legislature, both in the Senate and the House, to call them back into a special session to do another round of the ATR. Gov. Holcomb thinks they have the opportunity to come back this month and pass another ATR, and hopefully that too will help as the feds are getting more active.

What the state of Ind. has to focus on is controlling what they can control, keeping costs low, added the Gov.

Question two: Tretter asked, in regards to the 2023 legislative session focused on creating the states bi-annual budget— What sort of an outline do you think we’re looking at for our state? What are some of the things you hope to accomplish, and maybe you, in concert with legislature, hopes to accomplish?

First and foremost, Gov. Holcomb thinks there will be universal agreement to pass a balanced budget in Indiana. Then, they start to get into prioritizing where they are going to make investments as Indiana continues to grow.

When you think about the Ind. reserve level, as it is in fiscal year 2022, yes it’s high, yes we have the ability give back, and therefore we should but when you project out years from now, that reserve level is much lower explained Holcomb. So, you see how your expense side of the ledger starts to eat into the revenue you have, and you can’t just plan for a day.

So, Indiana is looking at making investments that will have a pronounced effect on where we want to be in a five year or 10 year period down the road.

Chasing the jobs of the future, that have deep routes, and that require the state to be prepared. That start’s with K-12 education and better and more relevant workforce development programs. Also, public health, education, work force development training, and another round of the Regional Economic Acceleration and Development Initiative (READI). Gov. Holcomb wants to go for another $500 million.

The state is chasing jobs that are going through a huge transition, and trying to bring those supply chains, not just back to America, but back to Indiana. By working towards quality over quantity all over the state of Indiana and aligning all the stake holders, such as institutions of higher learning, workforce development providers, and making sure we’re all focused in the same direction.

Question three: Tretter added that the group of Chamber members, and business owners in attendance at the luncheon have been stumped. The state’s unemployment rating at the end of April was 2.2% but we’re all having trouble finding employees. In the pandemic, people closing in on retirement, probably chose to retire. But what else is going? What is creating the problem?

Gov. Holcomb answered that it is math, when it comes down to it. Starting with 6.8 million Hoosiers and 3.3 million in the workforce, and Indiana being ranked third in the top three lowest unemployment rates in America. The state starts looking at who is not in the workforce, and why they are not, and understanding that Indiana’s workforce is trending towards retirement.

The pandemic had a more pronounced effect on Hoosiers that could afford to withdrawal from the workforce. The state needs more people added into the top of the work force funnel. This means Indiana needs to continue to grow its working age population, with affordable child care, immigration reform, or attracting people from other states. Gov. Holcomb thinks the key is how Indiana develops pipelines and pathways to work right now. The state is currently seeing really creative ideas within businesses to create those pathways and experiences.

Question four: Tretter sees two significant problems that are nationwide, not just in Indiana. The first is the lack of available housing, which she added is on the state’s radar with READI. The second problem is child care. What are some of the ideas in the state or in the nation for these issues?

Gov. Holcomb answered that the federal government is funneling a lot of dollars that come to states, through housing authorities. That the state in turn works to build affordable housing with those dollars that have been routed through the federal government to the state. Making sure that there is a local, state, and federal alignment and plans in place. Indiana has rolled out a housing dashboard (https://indianahousingdashboard.com/), which is a resource that shows where the gaps are in terms of housing. In terms of who is renting, who owns, what the employment levels are, and put together a plan to address any gaps.

Governor Holcomb recognized that housing and child care are huge impediments to a full work force. The state is going to continue to route dollars for affordable housing. The key is to have that plan on how to address the gaps. In terms of child care, there are hundreds of millions of dollars being routed to child care providers and people who qualify for assistance. A great place to start is on the Indiana Family and Social Services website (https://www.in.gov/fssa/childcarefinder/) added Gov. Holcomb. Chambers of commerce within the state of Indiana are looking into creative ways to pull in and scale up multiple businesses to be able to provide for that child care.

Question five: With the setting of the luncheon being at the Lincoln Amphitheatre in Lincoln State Park, which Tretter has proof is Indiana’s first state park. Tretter has said for years, that a state park inn is needed at LSP. She asked Gov. Holcomb is there any possibility in the future with that? Tretter noted that Holiday World, located just down the road, draws in one million people, looking for lodging.

Gov. Holcomb answered by saying that this is both interesting and requires a lot more follow up and planning. Potato Creek State Park will be the first new state park inn/lodge since 1939 being placed in Indiana. Personally for Gov. Holcomb, there are a few places where he is moved by where he is walking, one place is walking were Lincoln walked. He recognized that this is rare to have this many assets, such as Holiday World, Santa Claus, and Lincoln State Park in one county. Gov. Holcomb said this question is timely because sometime after Labor Day, the state will be rolling out their priorities and agenda. This is something Gov. Holcomb suggests would rank high in the second round of READI grants.

Question six: With two and half more years as Governor, Tretter asked what his future plans are? She also asked if he would consider a bid for Senator Mike Braun’s seat (if Sen. Braun runs for Governor)?

Gov. Holcomb: Gov. Holcomb answered that it was way too early to tell. He added that two and half years is a long time, and he doesn’t want to take his eye off the ball because there is so much positive possibilities for the state of Indiana.

After the chat concluded, the annual luncheon award recipients were announced and presented with their awards.