Sign Up
Log In
Purchase a Subscription
You have permission to edit this article.
Edit
Home
News
Sports
E-edition
Obituaries
Announcements
Entertainment
Opinion
Records
Classifieds
Legals
Submissions
Share This
1 of 2 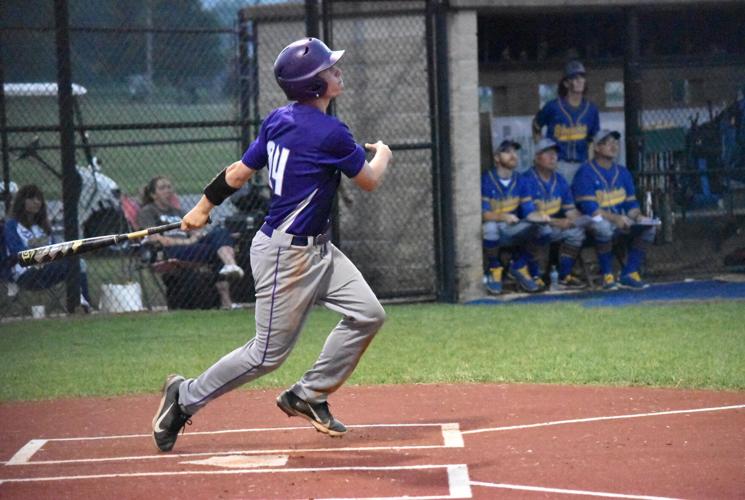 Trey Rominger watches as the ball sails toward the outfield seconds after exploding off of his bat. The freshman was the only Ram to pick up multiple hits in the loss to Mitchell, going two-for-three with a pair of singles and a stolen base to his name. (Auston Matricardi / Paoli News-Republican) 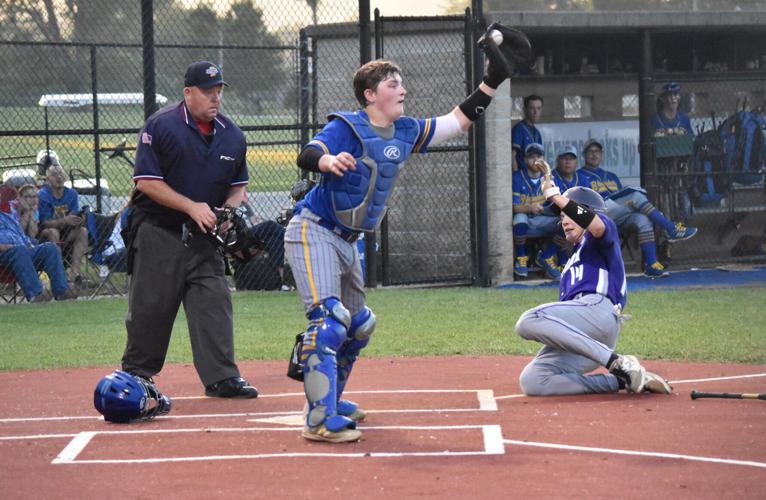 Mitchell catcher Carsyn Herald makes a catch, getting a force out as Paoli’s Carson Little slides in to the plate. The play was an integral part of the Bluejackets stifling a Ram rally in the second-inning, ultimately holding them scoreless in the frame. (Auston Matricardi / Paoli News-Republican)

Trey Rominger watches as the ball sails toward the outfield seconds after exploding off of his bat. The freshman was the only Ram to pick up multiple hits in the loss to Mitchell, going two-for-three with a pair of singles and a stolen base to his name. (Auston Matricardi / Paoli News-Republican)

Mitchell catcher Carsyn Herald makes a catch, getting a force out as Paoli’s Carson Little slides in to the plate. The play was an integral part of the Bluejackets stifling a Ram rally in the second-inning, ultimately holding them scoreless in the frame. (Auston Matricardi / Paoli News-Republican)

Mitchell came out on Wednesday, May 26 more than ready to defend its home field, opening sectional play against conference rival Paoli. The Bluejackets were clicking from the game’s first pitch, ultimately coming away with a big 12-2 victory.

In the top of the first, Mitchell pitcher Andrew Shepherd faced the minimum. The junior got a ground out, allowed a single, induced a fly out and then got a hand from Bluejacket backstop Carsyn Herald, who gunned down Paoli’s Trey Rominger as he tried to steal second.

The ‘Jackets kept that energy going into the dugout and got on a roll. Ben Seitzinger smoked a one-out triple to the wall in right-center and could’ve made it standing if he so chose. Two pitches later, he crossed the plate as Dawson Glassco did his job, lofting a high fly ball into the outfield for a sacrifice fly.

Simon Gaines got things going with two outs, drawing a walk, then took second and third on wild pitches. Herald was hit by a pitch, then Ethan Turner drew a walk to load the bases. AJ Sarver worked the count, coming back from down 1-2 to draw a walk, picking up an RBI. Then, Kody Earl reached on an error, scoring another run.

By the time that Mitchell returned to the field, it was up 3-0 — more or less an ideal position to be in, especially in a big game like Wednesday’s.

That, of course, was only the beginning. The second inning was even better for the Bluejacket bats as Shepherd drew a one-out walk and advanced to third on a wild pitch and an overthrow to second base. Seitzinger helped him take the final 90 feet on a line-drive single to left. Glassco kept it going, singling to give Mitchell a pair of runners. Then, with two outs, Herald and Turner hit back-to-back singles. The former drove in one run and the latter two.

The lead grew even bigger in the third as Shepherd and Seitzinger led off with back-to-back singles before Glassco ripped an RBI double to center. Gaines walked to load the bases, Herald picked up an RBI on a fielder’s choice and suddenly, the ‘Jackets led 9-0.

At that point, the lead was just too much to overcome for the Rams despite their efforts to get back in the game.

“Mitchell came out pretty aggressive, so I was looking for guys who were going to compete. That’s our big thing in that situation — who’s going to step up, who’s going to battle back and who’s just going to let that affect them? We had a mix of both,” Paoli coach Aaron Hannon said. “That happens. We tried to battle back, tried to chip into the lead, but their pitcher did a nice job of keeping us off-balance. They were clearly the more aggressive team tonight, so they’re moving on.”

Glassco drove in a run with a one-out single to right in the fourth inning, making the score 10-0. But Paoli finally fought back in the top of the fifth.

Sawyer Livingston drew a walk with two outs, then Rominger lined a single to left. Livingston scored as Bladen Patton reached on an error, and Rominger managed to cross the plate on a throw down to second.

Paoli’s reprieve didn’t last very long. Back-to-back walks led off the bottom of the fifth, then Earl doubled to right field to score a run. Sarver, the second of the two walks, had managed to make his way around to third on Earl’s hit, then scored on a wild pitch to end the ballgame.

Mitchell’s bats were a big part of the victory, but the Bluejackets also received a fantastic effort from Shepherd on the hill. The right-hander threw all five innings, allowing no earned runs on four hits. He also struck out seven batters while walking just three.

His biggest moment in the game came rather early on, as he truly locked down in the second inning, managing to preserve Mitchell’s 3-0 lead at the time despite staring down the barrel of a bases-loaded, one-out situation by getting a ground out and a strikeout.

The loss, of course, wraps up the season for Paoli (4-21, 1-5 PLAC). The inexperienced group of Rams faced a stiff learning curve throughout the season, but managed to show some promise toward the end of the season by winning three of their final eight games after starting the season with a 1-16 mark. That, combined with the fact that they return all but one player from this year’s team in lone senior Brett Bosley, gives them some hope moving forward.

“We’ve got a starting point. We’ve got a point where we can build on what we’ve already done this season,” Hannon said. “I think a lot of this year was a lot of establishing foundational skills and understanding how to play the game, so now we have that foundation. We’ve got kids who’ve had experience on the mound and in the lineup, so now it’s time to go to that next step. This is the new floor.”