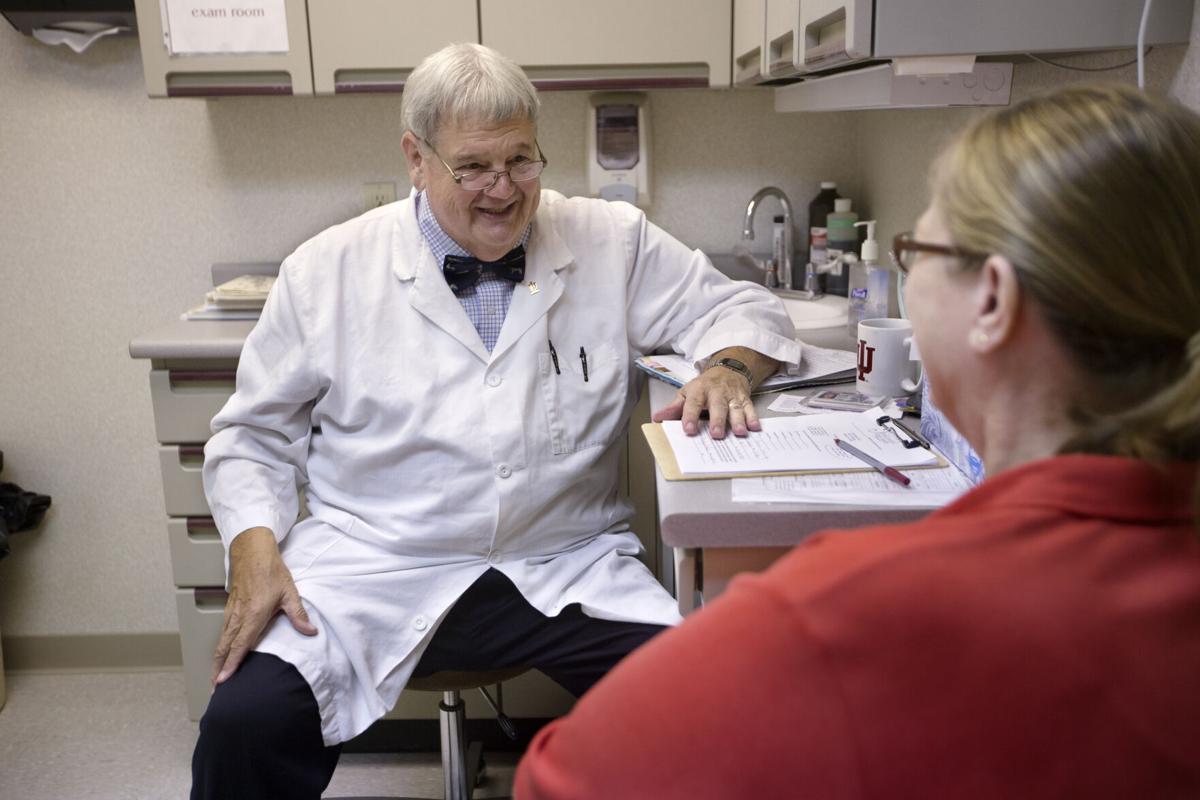 After working as a OB-GYN in Jasper for 36 years and delivering 6,304 babies, Dr. Terry Brown retired on June 29. In preparation for his retirement, Brown spent the past year saying goodbye to his longtime patients. On his last day, Brown talked with Marilyn Rasche of Dubois about the process of transferring his patients to other doctors in the area. 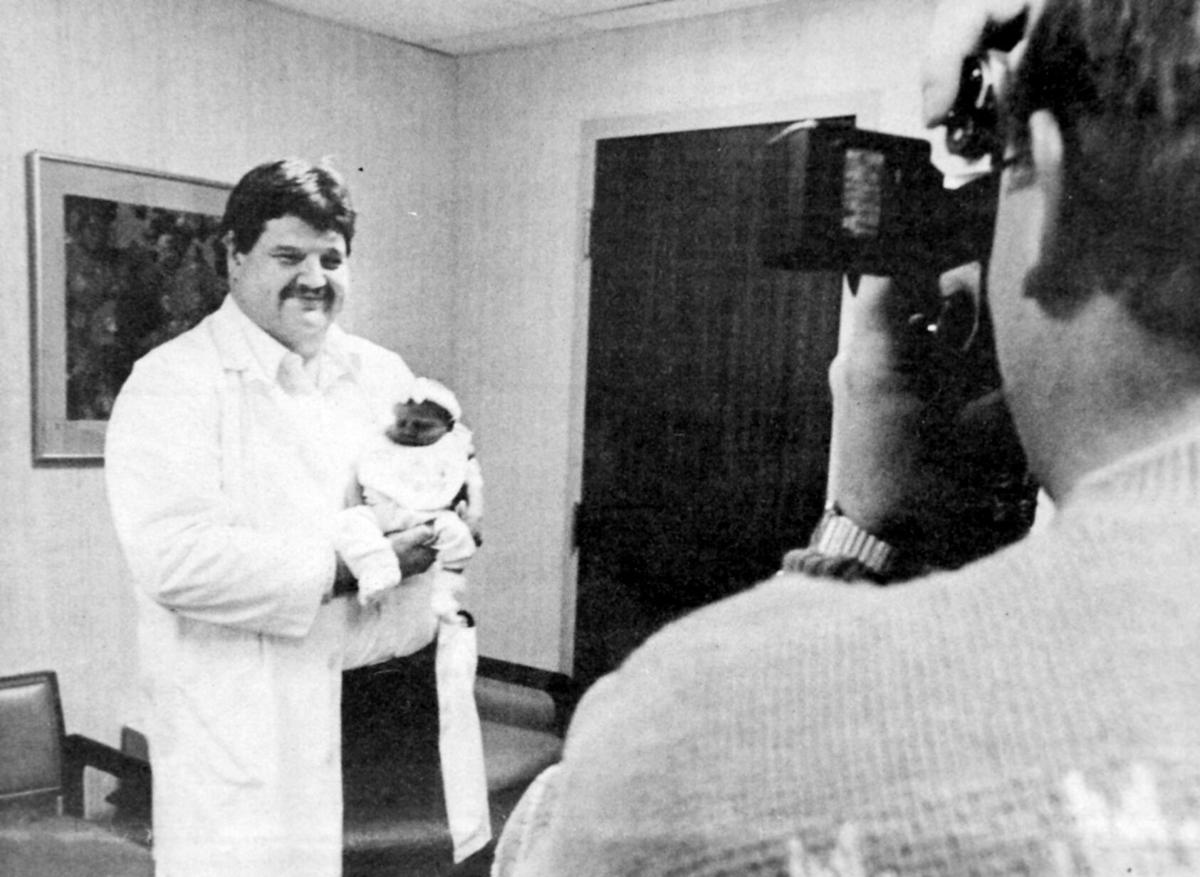 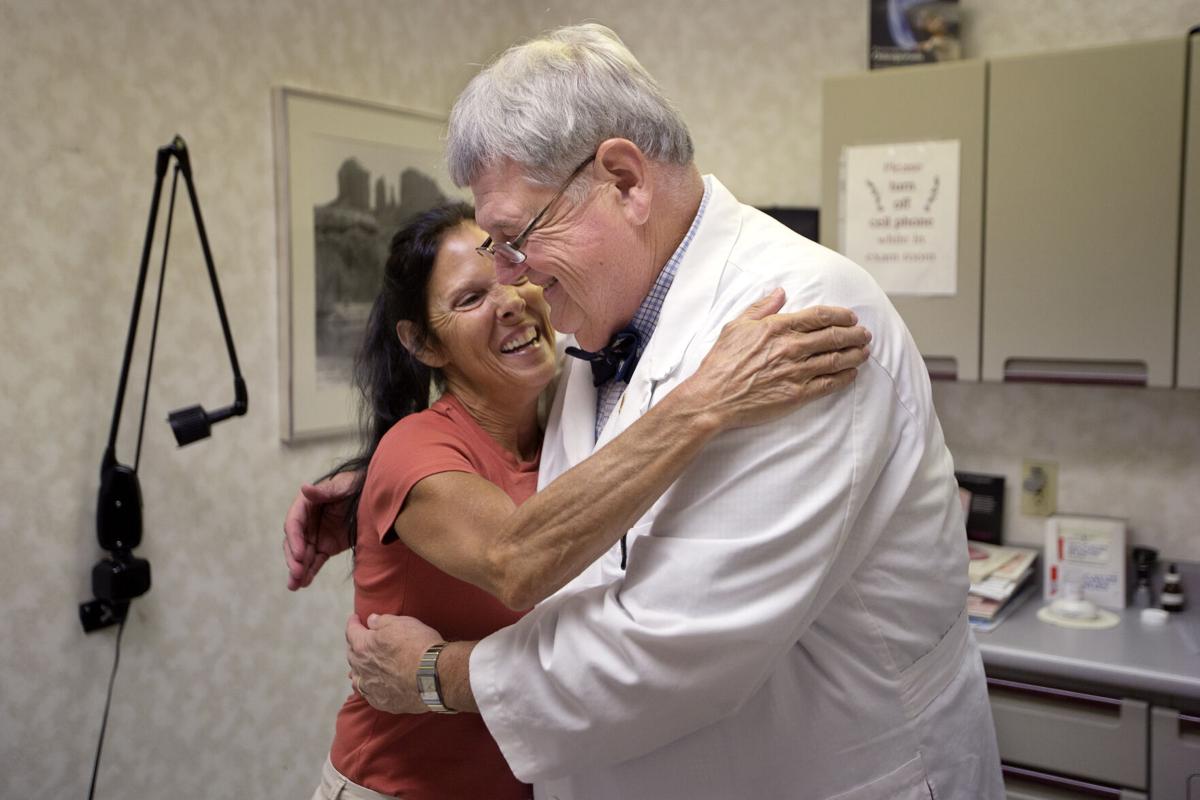 Maureen Kern of Dale, left, congratulated Brown on his last day before retiring. Brown delivered Kern’s second child in 1984. “He’s the best. I wouldn’t ask for another doctor. He’s so easy going. He explains everything step by step. I’m going to be sad to see him go. He’s going to be missed,” Kern said. 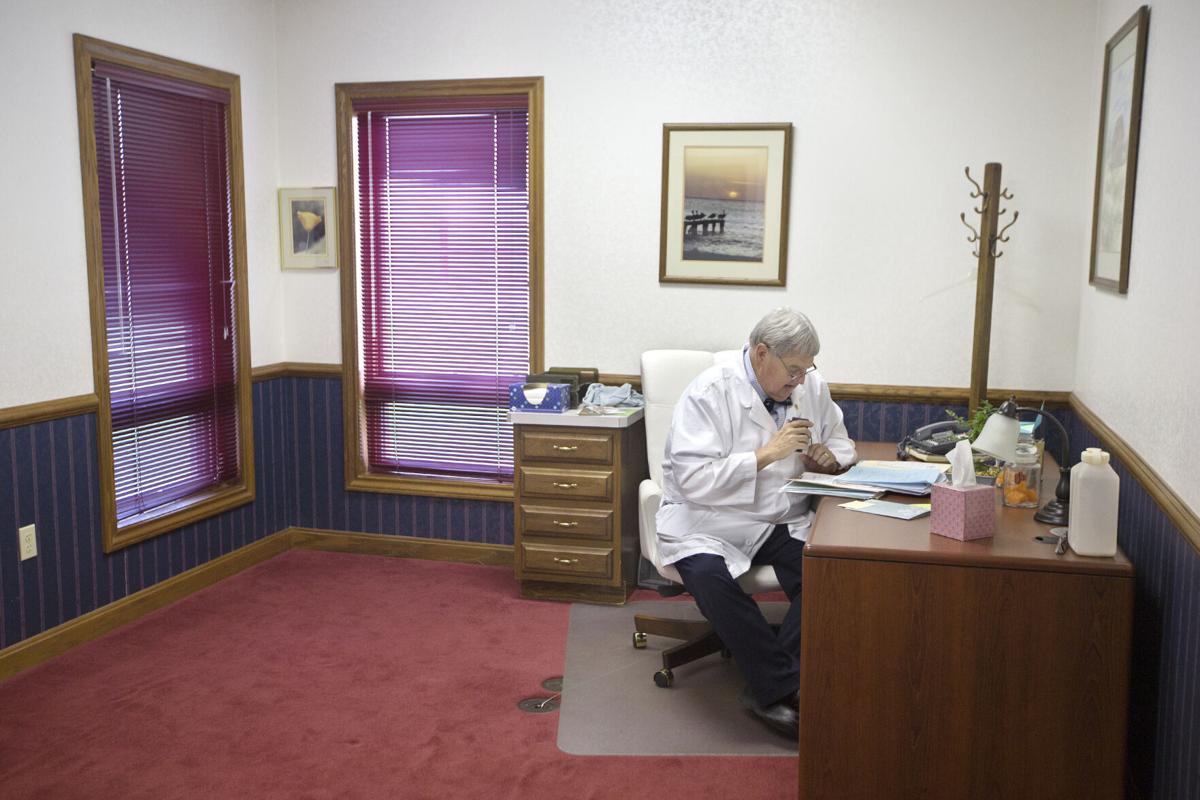 In between appointments with patients, Brown dictated notes and letters that were sent to Jasper OBGYN, where many of his patients will go to receive medical care. “I wanted to give the doctors ideas of what was going on in my head when I saw the patients,” Brown said as he prepared to record a note. 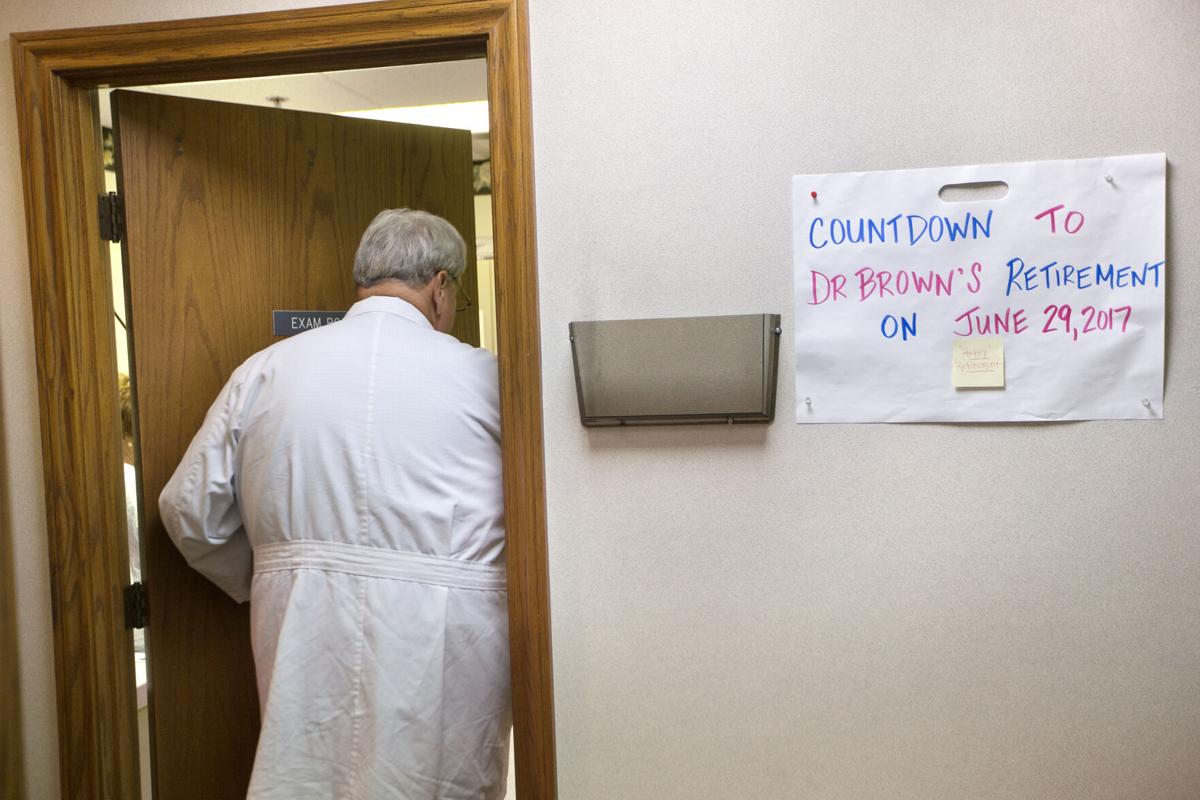 When Brown was at his busiest he saw anywhere from 35 to 50 patients in a single day. As he got closer to retirement, the number of patients shrunk to 20 to 25. 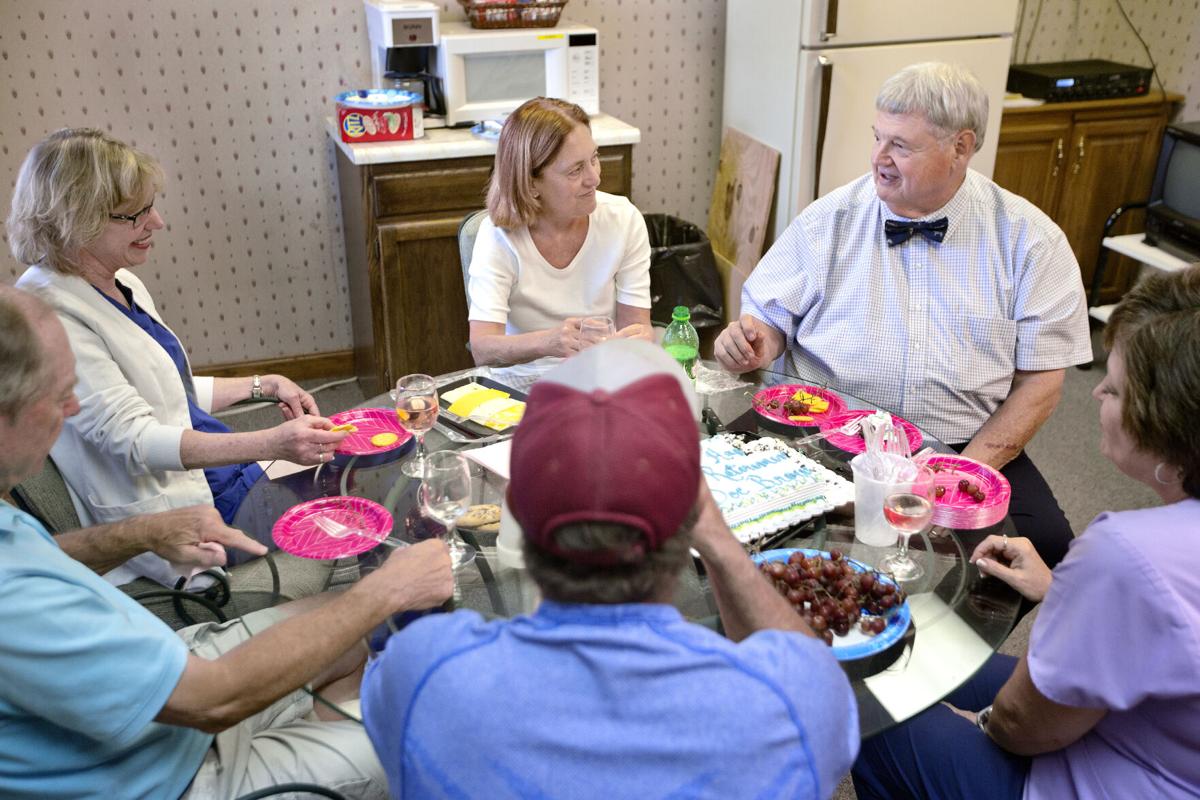 Brown, top right, celebrated his retirement with his wife, Betty, receptionist Brenda Schnaus, her husband, Doug, registered nurse Darlene Schreiner and her husband, Kent. The wine, cheese, grapes, cake and cookies they enjoyed were from a patient. “It’s time to play more golf and visit grandkids and do a little traveling,” Brown said with a laugh. “(and) Go to Florida in the winter.” 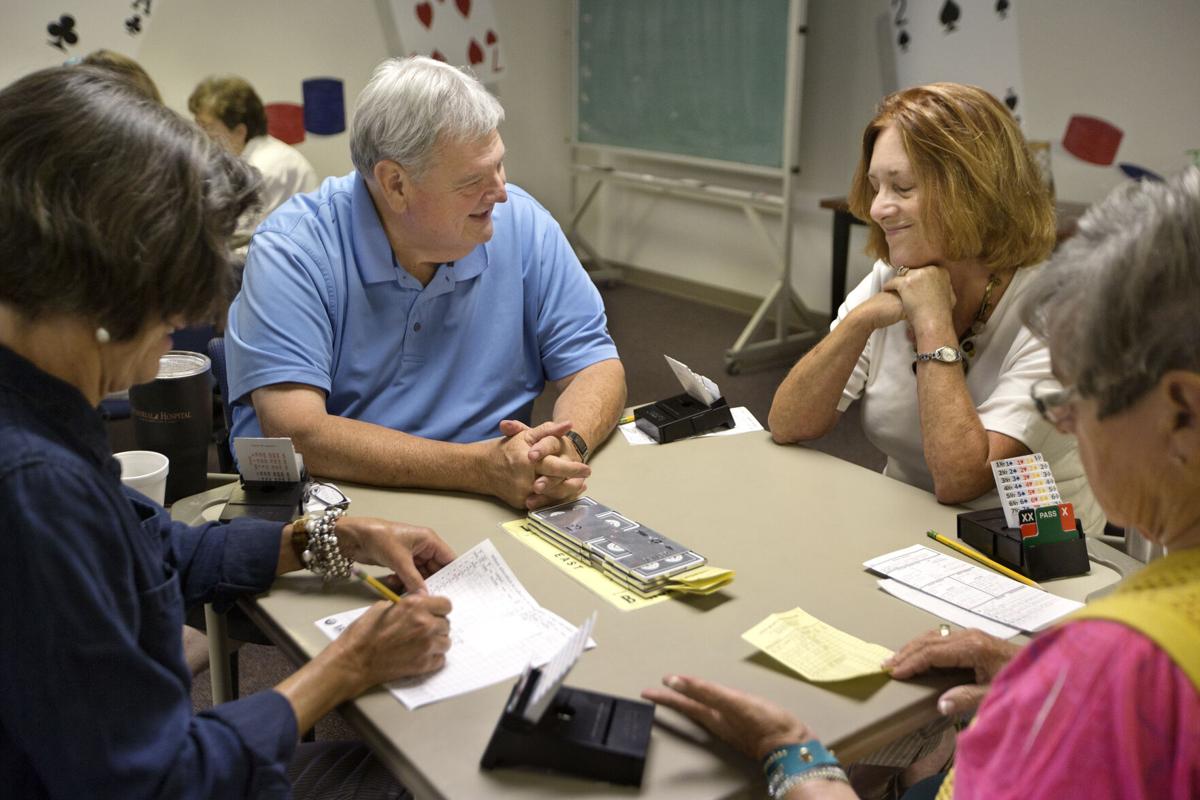 Brown hopes to spend more time with his wife, Betty, pictured right, and family as well as travel in retirement. Terry and Betty play bridge at the Arnold F. Habig Community Center most Wednesdays. “When I was dating Betty we didn’t go out on the town; we didn’t have money. I’d go over to her house and play cards with her parents or she’d come over to my house and play cards with my parents,” Brown said. “My generation and the generation below mine played cards growing up. It’s what we did for fun.”

At age 65, the OB-GYN officially hung up his white coat on June 29, retiring from his practice of 36 years.

His last day was a full day of activity with a flurry of patients coming through back-to-back for their last appointment with him and saying their goodbyes, including Maureen Kern of Dale. Brown delivered Kern’s second child 33 years ago.

“He is so friendly and kind,” she said. “He tells you jokes to make you laugh and helps you to relax.”

“He’s a good guy,” she said, “not that you would enjoy going to the gynecologist. But if you have to do it, he’s a good one to have.”

Gunn has been with Brown for 31 years and he delivered her three children. When she was pregnant with her third child, it had been 10 years after her second child was born.

“I had a little bit of trouble getting pregnant. And then I was a worrier,” Gunn said. “He was very kind and very reassuring. He would do ultrasounds and whatever I needed to put my mind at ease, and tell me that I still had a healthy baby. He didn’t have to do that, but he did.”

He also believes in building a relationship with the patient. “I tell medical students, ‘Just listen to your patient. Sit there and talk with them and speak in simple terms.’”

It is his bedside manner that has earned him accolades from the medical community.

In his career, Brown has delivered 6,304 babies, delivering his last on July 5, 2011. He has seen many of the children grow up, and some have become his patients.

As he met with patients on that last day in his office, he thought about all the people he’s met and the children he’s delivered.

“They tell me, ‘You delivered these three, but you missed that one.’ And I’m like, ‘Oh, I’m sorry. I took a day off.’ They always remember the ones I made it to and which ones I didn’t,” he said. “I’ve had several patients tell me that they’ve seen me since they were 15 or 18 and they’re menopausal now. And then they start to cry and we’d hug.”

Gunn remembered the times Brown went above and beyond the call of duty, in particular by helping her mother, who had multiple sclerosis, about 15 years ago. She had a catheter that needed to be changed monthly, but her doctor was in Evansville.

“My mom could not walk. She was in a wheelchair,” Gunn said. “So we always had to physically lift her and transfer her.”

Since she was his patient, Gunn knew that Brown had tables that could be raised and lowered.

“Because of his tables, I asked him if he would consider taking on mom to do that catheter change,” Gunn said. “And he didn’t bat an eye. He said of course. So for most of the visits, Dr. Brown and my dad would help Mom get onto the table.”

As time went on, Brown and Gunn’s father developed a friendship based on a common interest. “Dr. Brown went to school at IU and my dad was a big IU basketball fan,” she said. “So there was a lot of IU discussed when dad brought mom in. And he enjoyed it.”

Gunn said she was thankful to Brown for taking on the task and being so great with her parents.

“He definitely didn’t have to do that. But he more than willingly took it on in his office, to accommodate her health issues,” she said. “Otherwise mom would have had to drive over an hour there and an hour back every month. We very much appreciated it.”

Brown also supported Gunn in her time of need. In 2013, after having a mammogram Brown ordered, Gunn found out that she had breast cancer. “I was a basket case,” she recalled. “He talked me through it and reassured me. He let me know that it would be fine and I’d be here to raise my daughter. He can be very direct with things, but then he’s very compassionate also.”

Gunn made it through and is now getting checkups every six months. “So far so good,” she said.

Locally, he has been involved with the Patoka Valley Health Care Cooperative, Vincennes University Jasper Campus, Greater Jasper School Corporation as a volunteer parent and the Jasper Community Arts Commission board.

“I could not have done this, been so involved in my career, without Betty’s support,” Brown said, also saying he’s gotten a lot of support from his office staff and Memorial Hospital.

Along with being affiliated with Memorial as a doctor, Brown has served in various positions at the hospital over the years, a sampling of those being chairman of the obstetrics department, the department of surgery and the credentials committee. Currently, he is a professional consultant at Daviess Community Hospital and the liaison to the IU School of Medicine-Evansville’s third- and fourth-year medical student programs at Memorial.

He helped to bring graduate residencies in family practice to Memorial, which morphed into having a residency training program consortium between Deaconess and St. Vincent in Evansville, and Good Samaritan in Vincennes and Jasper. Currently, a clinic is being built at the corner of Bartley and 13th streets; it will be staffed with family practice residents and overseen by family practice physicians and other physicians.

“If a student goes to college in an area and does their medical school in an area and then does their residency in an area, the likelihood of them staying in the area is close to 75 percent,” Brown said. “And that’s what we really need in Jasper and surrounding area: more family practice doctors.”

Brown has had a tie to Memorial all his life. “I was supposedly the 50th baby born at Memorial Hospital,” he said with a laugh. His parents, the late Clarence “Brownie” and the late Betty, always wanted Brown to go on to higher education.

“From the time I was in first grade, my dad said, ‘You’re going to college. We’ll find a way, but you’re going.’ Mom was the loving, caring, supporting mother. But dad was the one who was the powerhouse. Mom was the yin to my dad’s yang,” Brown said.

A young Brown worked at the hospital when he was in high school, scrubbing the kitchen floors and doing odd jobs during the summers. In college, he worked a summer on the medical floor as an orderly and another in the emergency room. He also worked in the operating room before receiving his undergraduate degree. “That experience was invaluable,” he said.

Brown became interested in medicine when he was a fourth-grader.

“There was a TV show on at the time called ‘Ben Casey,’” Brown said. “He was a brain surgery resident in New York City. And oh my goodness, I couldn’t get enough of that stuff.”

His schoolteachers encouraged his interest. “Both of my parents worked. So my fourth-grade teacher (Mrs. Nixon) would get these old chemistry sets and let me stay after school and play with the chemistry sets,” Brown recalled. “My sixth-grade teacher (Ms. Huff) would give me books she would get from the IU library. And I would read books about being a doctor. They were very inspiring, very supportive.”

Brown was on track to be a neurosurgeon.

“I was absolutely certain that I would be a brain surgeon,” he said. “There was no question in my mind when I got to medical school, until I took the classes. I was literally getting a B or a C+ in some of the classes that had to do with brains and nerves. But when it came to pelvis and hormones, I was at the top of the class. So it didn’t take me long to figure out that maybe I should go with my strongest suit.”

So he changed his track and became an OB-GYN.

Patients have shown their appreciation by giving Brown gifts, cards and food items over the years. “Christmas has been especially good,” Brown said. “Not good for my diabetes.”

Patients who came on his last day continued that tradition by bringing him cards and tokens of appreciation, including Rudolph.

“This is a profession where you develop a relationship with the patient,” Brown said. “You don’t always have to immediately solve the problem. Sometimes, it’s just about holding a person’s hand and listening.”

In his retirement, Brown plans to do more recreational activities, like traveling with his wife and spending more time with his grandchildren. Although he is looking forward to playing bridge, golfing and gardening, he said he will miss his patients.

And they will miss him, too.