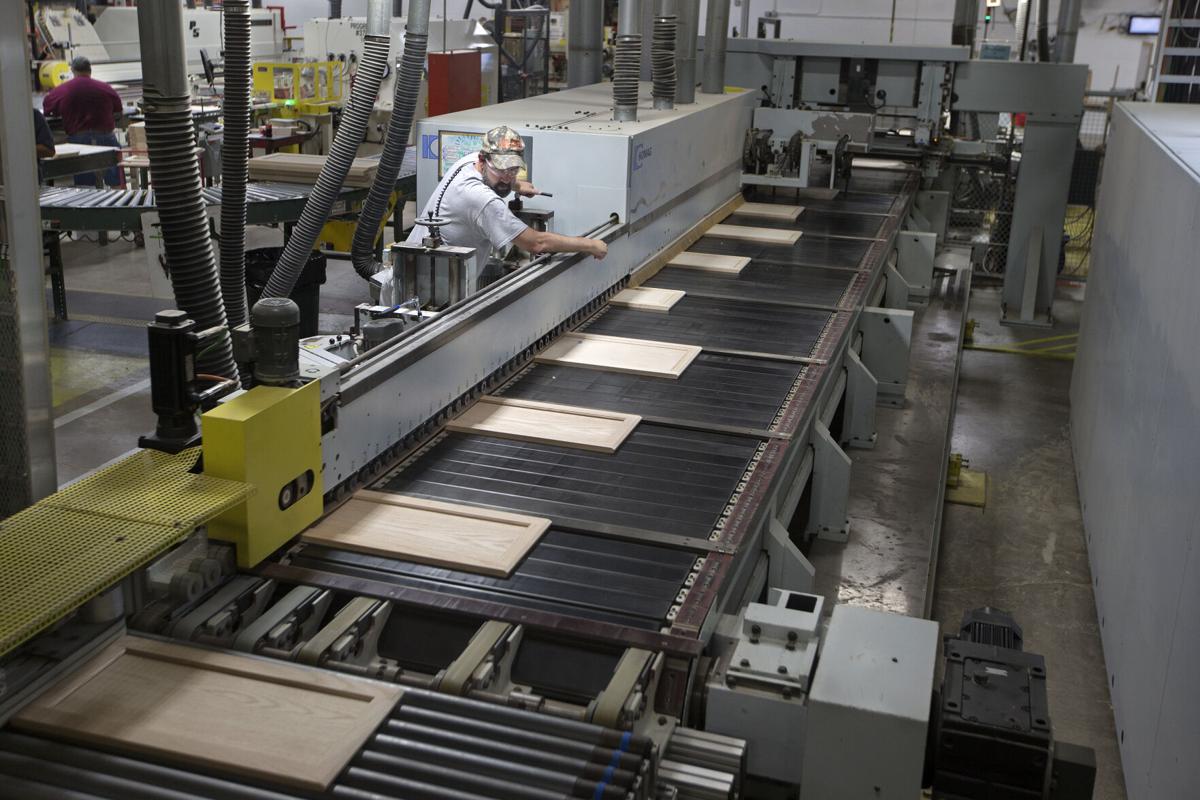 Photos by Brittney Lohmiller/The Herald MasterBrand Cabinets employee Bill Buchanan checked to make sure the sanding belt was hitting all of the cabinet doors being run through an automated door edge shaping machine that sands all four sides of the doors Wednesday morning in Ferdinand. The sanding machine can sand up to 1,000 cabinet doors in an hour. 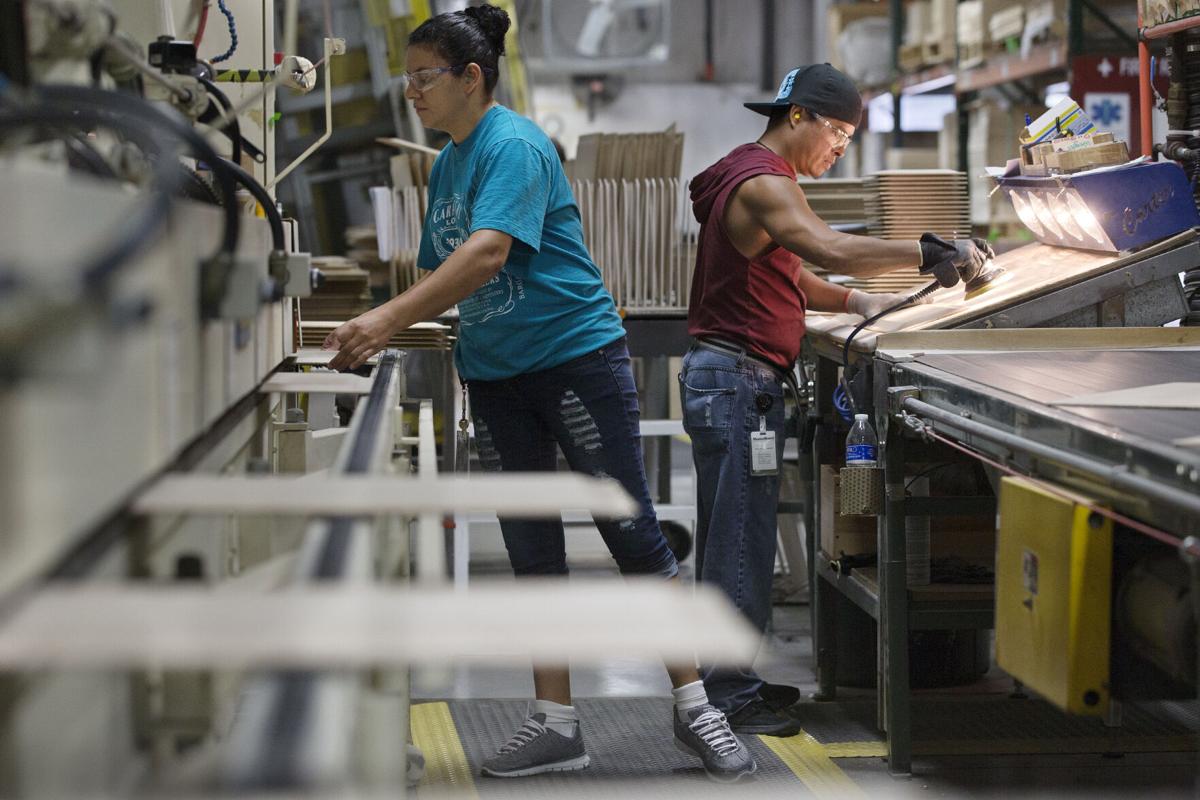 MasterBrand Cabinets employees Leticia Gomez, left, and Julio Chevez used a profile sander to sand cabinet center panels Wednesday morning at the plant in Ferdinand. After Gomez ran the panels through the machine, Chevez hand-checked for any blemishes that the machine couldn't get out. 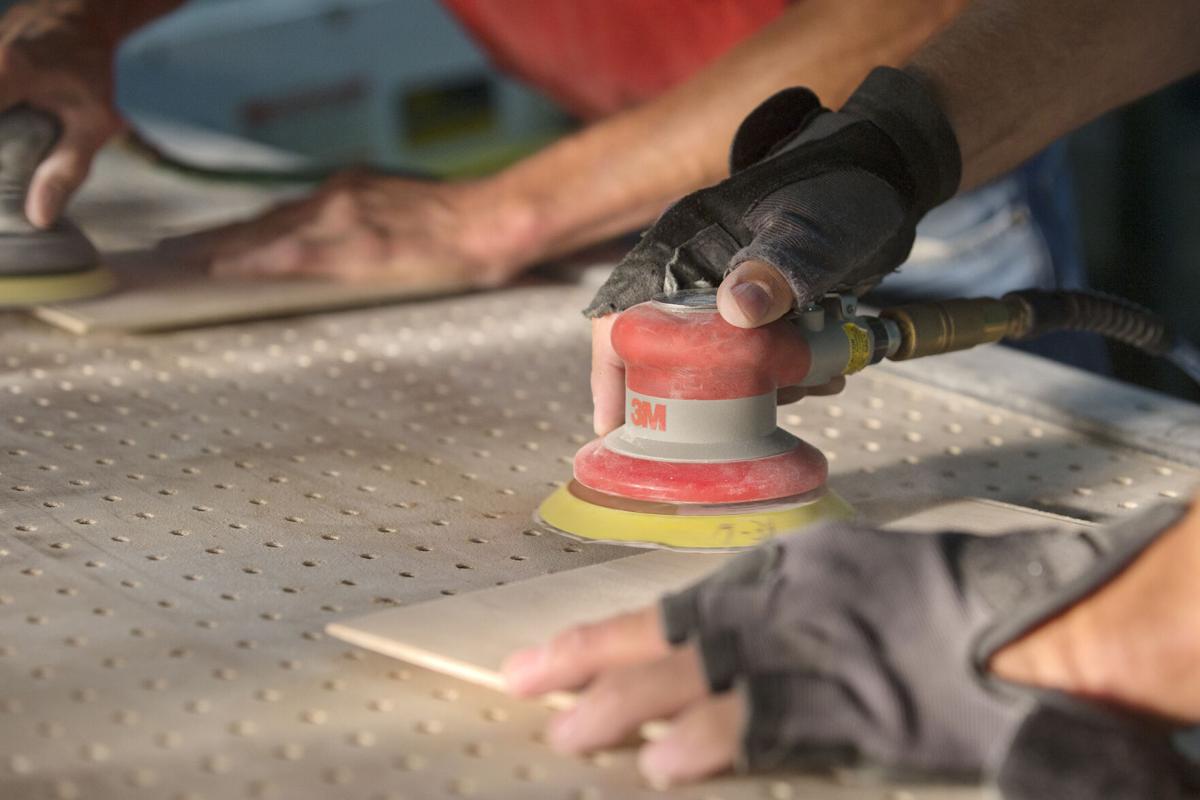 Brittney Lohmiller/The Herald MasterBrand Cabinets, Inc. employee George Meyer sanded a cabinet center panel after it went through the profile sander machine Wednesday morning at the plant in Ferdinand. "Machines can't get catch all of the blemishes and before all of the center panels were done by hand," General Manager of MasterBrand Ferdinand plant Scott Denhart said. 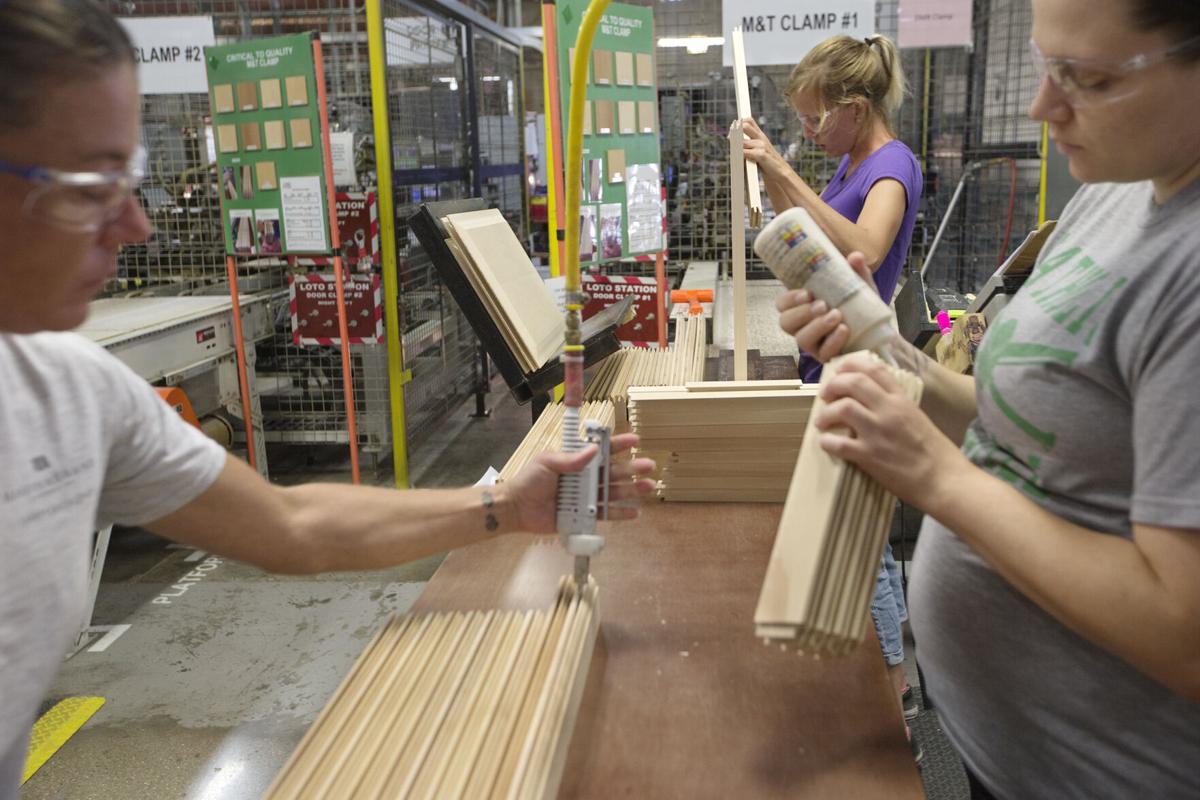 MasterBrand Cabinets employees Stacie Battreal, left, Elizabeth Bean and Morgan Rice roughly assembled a cabinet door before it's placed inside a machine that squares the edges and nails the pieces together Wednesday morning at the plant in Ferdinand. "Most of the automation here is aimed to help with positioning pieces or moving parts," General Manager of MasterBrand Ferdinand plant Scott Denhart said.

With changing technologies, some area manufacturers say there’s no doubt the amount of automation they use within their facilities will increase in years to come.

“It’s a game-changer,” Kevin Ward, plant manager at Kimball Hospitality, said of automation. Kimball Hospitality is in the midst of a $4.4 million, two-year project — the 16th Street Realignment Project — which will install state-of-the-art manufacturing equipment in the plant, allowing the company to automate some of the labor performed by employees, such as moving product from station to station.

Automation is technology that automatically controls a process, such as tech involved with the manufacturing of a product. A recent study by Ball State University’s Center for Business and Economic Research sought to find out how communities will be affected by automation. The study, “How vulnerable are American communities to automation, trade & urbanization?” suggests that about half of U.S. jobs are at risk because of automation. It puts about 59 percent of Dubois County jobs at risk.

“As a workplace is automated, it is unlikely that all occupations will be eliminated,” the study concludes. “Rather, some jobs will be created, some will be destroyed, and others will be unaffected.”

With Kimball Hospitality’s project, Ward doesn’t expect the company to lose any employees.

“The key before you automate is that you have to make sure your employees can accept that automation,” he said, also saying that the company began cross-training employees about two years ago in anticipation of increased automation.

He said Kimball Hospitality’s “most capable” computer network-controlled machine is 19 years old and was the best technology for its time. It, as well as other machines, will soon be replaced with machines that are more automated, allowing for more flexibility.

For example, say a customer orders a hotel room of furniture. Ward said a new automated machine will be capable of automatically changing over to run each piece of different furniture one right after the other, a process called mixed-model. The older machine can do mixed-model, but Ward said that because the changeover is not automated, the process takes too long.

“It’s about synchronizing the plant to orders,” he said of the company’s increased automation efforts. “We want to be flexible so when a customer has a need, we can do it. We can now tailor the manufacturing process to a customer’s needs.”

He said new technologies at the plant will allow the facility to produce more product when demand increases. When that happens, he said, the plant will need to hire additional employees.

“Our human resources are driven by customer demand,” he said.

Jasper-based MasterBrand Cabinets has also integrated automation into its cabinet manufacturing. Much of the technology is used for the movement and handling of materials.

“We also have some plants looking at pick-and-place robots where an arm takes a piece and puts it in the machine and once finished, takes it out,” said Scott Denhart, general manager of MasterBrand’s Ferdinand plant. “The spraying of doors, there’s robotics involved in that as well.”

He said safety is one of the biggest drivers that led the company to automation.

“We’re always looking at reducing the opportunity for injury in the plant,” Denhart said. “A lot of injuries stem from the repetitive motion type of work.”

He said automation can help with that. It also helps with quality control, keeping the product the same every time.

“There’s also the old saying that a robot never takes a day off,” he said. “There’s reliability that that particular function is performed no matter what.”

As automation evolves, Denhart said a business typically grows. He remembers when MasterBrand was producing 2, 3, 4,000 units per day. Now daily business is at about 10,000 cabinets a day.

He believes the value of the employee has not been lost during MasterBrand’s move to automation. There’s a human element in the production process.

“There’s a certain amount of fitting parts together that is challenging for robots,” Denhart said. “Everyone (employees) is also responsible for ‘ugly to obvious’ defects and not letting them out of the plant. How does a machine do that?”