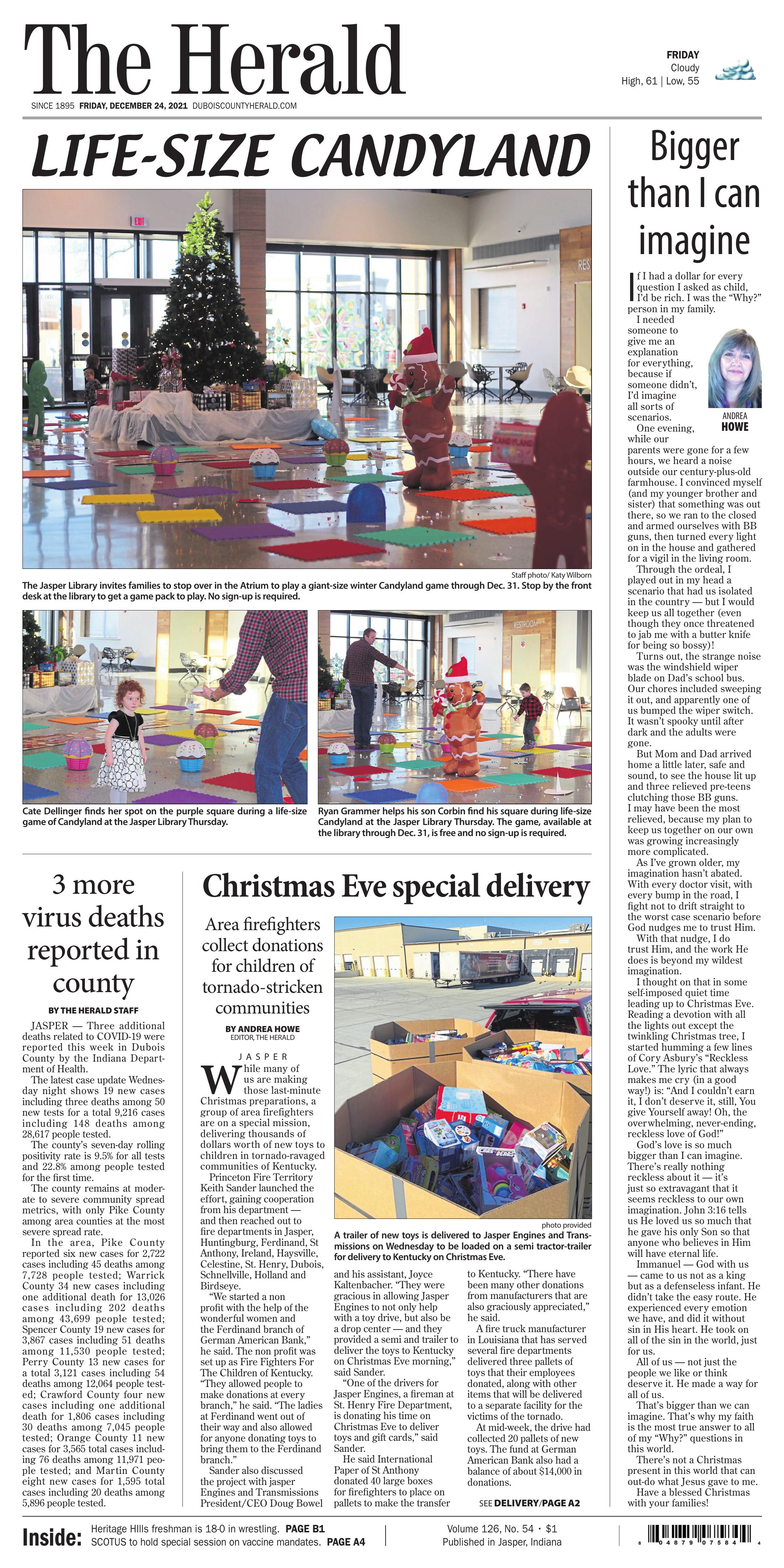 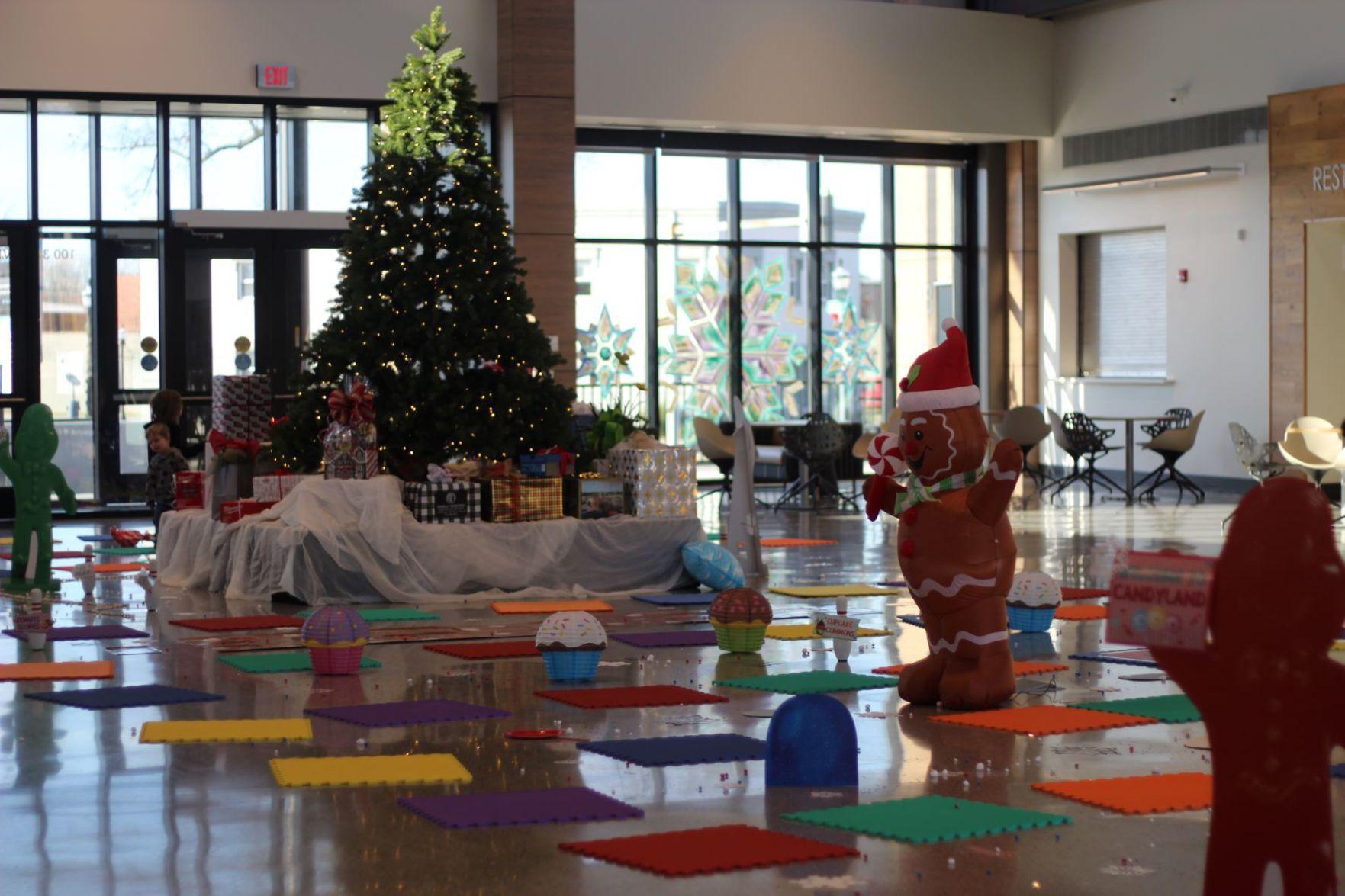 The Jasper Library invites families to stop over in the Atrium to play a giant-size winter Candyland game through Dec. 31. Stop by the front desk at the library to get a game pack to play. No sign-up is required.

A trailer of new toys is delivered to Jasper Engines and Transmissions on Wednesday to be loaded on a semi tractor-trailer for delivery to Kentucky on Christmas Eve.

While many of us are making those last-minute Christmas preparations, a group of area firefighters are on a special mission, delivering thousands of dollars worth of new toys to children in tornado-ravaged communities of Kentucky.

“We started a non profit with the help of the wonderful women and the Ferdinand branch of German American Bank,” he said. The non profit was set up as Fire Fighters For The Children of Kentucky. “They allowed people to make donations at every branch,” he said. “The ladies at Ferdinand went out of their way and also allowed for anyone donating toys to bring them to the Ferdinand branch.”

Sander also discussed the project with jasper Engines and Transmissions President/CEO Doug Bowel and his assistant, Joyce Kaltenbacher. “They were gracious in allowing Jasper Engines to not only help with a toy drive, but also be a drop center — and they provided a semi and trailer to deliver the toys to Kentucky on Christmas Eve morning,” said Sander.

“One of the drivers for Jasper Engines, a fireman at St. Henry Fire Department, is donating his time on Christmas Eve to deliver toys and gift cards,” said Sander.

He said International Paper of St Anthony donated 40 large boxes for firefighters to place on pallets to make the transfer to Kentucky. “There have been many other donations from manufacturers that are also graciously appreciated,” he said.

A fire truck manufacturer in Louisiana that has served several fire departments delivered three pallets of toys that their employees donated, along with other items that will be delivered to a separate facility for the victims of the tornado.

At mid-week, the drive had collected 20 pallets of new toys. The fund at German American Bank also had a balance of about $14,000 in donations.

“We are going to Hopkins County High School on Christmas Eve,” said Sander. “We will be bringing the toys, and we have 250 Walmart $25 gift cards we will be distributing.”

He said the plan is to work with pastors to conduct a Christmas in July back-to-school event for the communities.

“Please remember, the non profit is still available at any German American bank under the name of Fire Fighters for the Children of Kentucky,” he said. “We would love to go back down with another amazing amount of help in July.”

“I’ve also been in contact with Santa Claus. He has promised me that he and possibly several of the elves will be coming to help deliver the toys. He is very busy right now, but wants to come see the children in Kentucky in this difficult time,” he said.

Editorials
Bigger than I can imagine

If I had a dollar for every question I asked as child, I’d be rich. I was the “Why?” person in my family.

I needed someone to give me an explanation for everything, because if someone didn’t, I’d imagine all sorts of scenarios.

One evening, while our parents were gone for a few hours, we heard a noise outside our century-plus-old farmhouse. I convinced myself (and my younger brother and sister) that something was out there, so we ran to the closed and armed ourselves with BB guns, then turned every light on in the house and gathered for a vigil in the living room.

Through the ordeal, I played out in my head a scenario that had us isolated in the country — but I would keep us all together (even though they once threatened to jab me with a butter knife for being so bossy)!

Turns out, the strange noise was the windshield wiper blade on Dad’s school bus. Our chores included sweeping it out, and apparently one of us bumped the wiper switch. It wasn’t spooky until after dark and the adults were gone.

But Mom and Dad arrived home a little later, safe and sound, to see the house lit up and three relieved pre-teens clutching those BB guns. I may have been the most relieved, because my plan to keep us together on our own was growing increasingly more complicated.

As I’ve grown older, my imagination hasn’t abated. With every doctor visit, with every bump in the road, I fight not to drift straight to the worst case scenario before God nudges me to trust Him.

With that nudge, I do trust Him, and the work He does is beyond my wildest imagination.

I thought on that in some self-imposed quiet time leading up to Christmas Eve. Reading a devotion with all the lights out except the twinkling Christmas tree, I started humming a few lines of Cory Asbury’s “Reckless Love.” The lyric that always makes me cry (in a good way!) is: “And I couldn’t earn it, I don’t deserve it, still, You give Yourself away! Oh, the overwhelming, never-ending, reckless love of God!”

God’s love is so much bigger than I can imagine. There’s really nothing reckless about it — it’s just so extravagant that it seems reckless to our own imagination. John 3:16 tells us He loved us so much that he gave his only Son so that anyone who believes in Him will have eternal life.

Immanuel — God with us — came to us not as a king but as a defenseless infant. He didn’t take the easy route. He experienced every emotion we have, and did it without sin in His heart. He took on all of the sin in the world, just for us.

All of us — not just the people we like or think deserve it. He made a way for all of us.

That’s bigger than we can imagine. That’s why my faith is the most true answer to all of my “Why?” questions in this world.

There’s not a Christmas present in this world that can out-do what Jesus gave to me.

Have a blessed Christmas with your families!

JASPER — Three additional deaths related to COVID-19 were reported this week in Dubois County by the Indiana Department of Health.

The county’s seven-day rolling positivity rate is 9.5% for all tests and 22.8% among people tested for the first time.

The county remains at moderate to severe community spread metrics, with only Pike County among area counties at the most severe spread rate.

Click and hold your mouse button on the page to select the area you wish to save or print. You can click and drag the clipping box to move it or click and drag in the bottom right corner to resize it. When you're happy with your selection, click the checkmark icon next to the clipping area to continue.