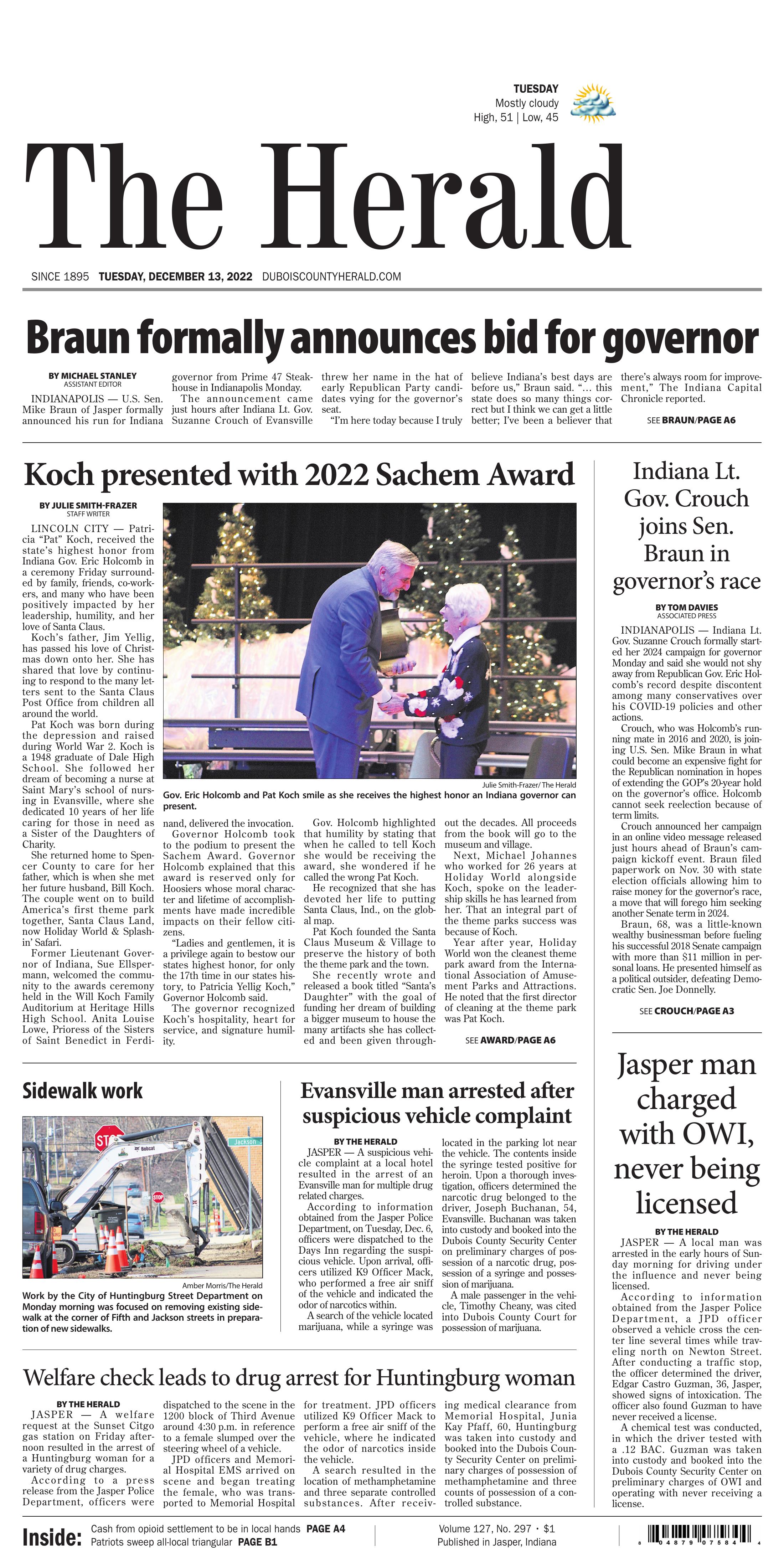 The announcement came just hours after Indiana Lt. Gov. Suzanne Crouch of Evansville threw her name in the hat of early Republican Party candidates vying for the governor’s seat.

“I’m here today because I truly believe Indiana’s best days are before us,” Braun said. “… this state does so many things correct but I think we can get a little better; I’ve been a believer that there’s always room for improvement,” The Indiana Capital Chronicle reported.

“I built the American dream in my own hometown over those 30 years from a little business that only had 17 employees for 17 years,” Braun said. “My office was a used mobile home — literally — for those first 17 years. (We now have) hundreds of employees, over 1,000, across the country.”

First serving in the Indiana House of Representatives in from 2014-2018, Braun won election for the U.S. Senate in 2018. He earlier announced he would not seek re-election to that seat. Many believe former Indiana Governor Mitch Daniels and possibly Gov. Eric Holcomb will look to fill the seat.

“I’m a Main Street businessman that became a politician… and that’s the reason I’m running for governor,” Braun said. “I’m going to do the things that are easy, like making sure that the budget is balanced and that we keep a good business climate... (But) I’m going to tackle the tough issues that you’re going to need somebody that’s going to stick their neck out (and) take a little risk.”

Gov. Eric Holcomb and Pat Koch smile as she receives the highest honor an Indiana governor can present.

Pat Koch’s children recall fond memories growing up with their mother. “She just completely embodies the spirit of Christmas. Her house has Christmas decorations up year round, and she often will be found wearing a Santa Claus or Christmas sweater and a Santa hat,” says her daughter Kristi.

LINCOLN CITY — Patricia “Pat” Koch, received the state’s highest honor from Indiana Gov. Eric Holcomb in a ceremony Friday surrounded by family, friends, co-workers, and many who have been positively impacted by her leadership, humility, and her love of Santa Claus.

Koch’s father, Jim Yellig, has passed his love of Christmas down onto her. She has shared that love by continuing to respond to the many letters sent to the Santa Claus Post Office from children all around the world.

Pat Koch was born during the depression and raised during World War 2. Koch is a 1948 graduate of Dale High School. She followed her dream of becoming a nurse at Saint Mary’s school of nursing in Evansville, where she dedicated 10 years of her life caring for those in need as a Sister of the Daughters of Charity.

She returned home to Spencer County to care for her father, which is when she met her future husband, Bill Koch. The couple went on to build America’s first theme park together, Santa Claus Land, now Holiday World & Splashin’ Safari.

Former Lieutenant Governor of Indiana, Sue Ellspermann, welcomed the community to the awards ceremony held in the Will Koch Family Auditorium at Heritage Hills High School. Anita Louise Lowe, Prioress of the Sisters of Saint Benedict in Ferdinand, delivered the invocation.

Governor Holcomb took to the podium to present the Sachem Award. Governor Holcomb explained that this award is reserved only for Hoosiers whose moral character and lifetime of accomplishments have made incredible impacts on their fellow citizens.

“Ladies and gentlemen, it is a privilege again to bestow our states highest honor, for only the 17th time in our states history, to Patricia Yellig Koch,” Governor Holcomb said.

Gov. Holcomb highlighted that humility by stating that when he called to tell Koch she would be receiving the award, she wondered if he called the wrong Pat Koch.

He recognized that she has devoted her life to putting Santa Claus, Ind., on the global map.

Pat Koch founded the Santa Claus Museum & Village to preserve the history of both the theme park and the town.

She recently wrote and released a book titled “Santa’s Daughter” with the goal of funding her dream of building a bigger museum to house the many artifacts she has collected and been given throughout the decades. All proceeds from the book will go to the museum and village.

Next, Michael Johannes who worked for 26 years at Holiday World alongside Koch, spoke on the leadership skills he has learned from her. That an integral part of the theme parks success was because of Koch.

Year after year, Holiday World won the cleanest theme park award from the International Association of Amusement Parks and Attractions. He noted that the first director of cleaning at the theme park was Pat Koch.

Koch leads by example and Johannes highlighted how it would be common to find Koch working alongside the park’s sweepers and cleaners.

He recounted stories that further depicted how Koch is a great leader who led by example and never asked anyone to do something that she herself would not do. She was not just being given this award, she has earned this award, explained Johannes.

Samantha Ray came to work at Holiday World at the age of 14 as a sweeper. She had a difficult home life and never felt support or encouragement from her family.

At the Sachem award ceremony, Ray explained how her experience working at Holiday World and learning from Pat Koch, changed the course of her life for the better.

Ray is thankful that Koch spent her time with the people she wanted to impact. She explained how Koch had high expectations and expected the Holiday World staff to respect people, make eye contact, and to work hard.

Koch knew Ray had a troubled life at home and took her under her wing. Ray would help Koch with her public speaking engagements. Koch built confidence and trust in the young employee.

Going to these public speaking events, Ray also learned about Jesus for the first time.

“I beat the odds,” Ray said. At 40, she owns her own real estate business with her husband. She explains she owes her successes to Jesus, Koch, and her husband.

Next to speak was Kathy Tretter, Publisher and Editor of The Ferdinand News and Spencer County Leader. She has served for many years with Koch on the Spencer County Regional Chamber of Commerce Board of Directors.

She could not think of a more deserving person for the Sachem Award. “Patricia “Pat” Yelling Koch is truly one in a million,” Tretter noted.

Tretter explained this is a celebration of a woman who started to do things her own way, before it was fashionable to do so. Tretter spoke on Koch’s journey of becoming a nun and leaving the convent to care for her father.

She highlights how one of Koch’s passions is the Santa Claus Museum & Village, and how important it is for her to preserve the history of Santa Claus.

Three of Pat and Bill Koch’s children, Kristi, Dan and Natalie, also spoke at the awards ceremony. They reminisced on memories of their childhood with their mother. Kristi recounted walking her horse Prancer down to the theme park for their horse show.

At the age of 91, their mother’s calendar still remains full with meetings and appointments. In the summers, she works with Dan at their theme park Alabama Splash Adventure, where she is known as “The General.”

“She wants everyone to believe, not just in Santa Claus and Christmas but in the spirit of kindness and giving,” Kristi said.

As Pat Koch took to the podium, she joked that she felt as though she had heard her eulogy.

She explains how she is humbled to have her name among the other recipients who have received the Sachem Award.

The one thing that Koch has thought about when she was told she would receive this award is that there are so many people that have helped her and how important it is to make relationships and to work with people.

She highlighted how she couldn’t possibly respond to all of the Santa letters, that many people come in and dedicate their time to help respond to the thousands of letters sent to Santa Claus.

While on the stage, Koch continuously had the audience laughing with her during her engaging thank you address.

She took the time to thank many people during her address including her God; her father, Jim Yellig; the Daughters of Charity; the Sisters of Saint Benedict in Ferdinand; and her late husband, Bill Koch and the Koch family.

She also recognized her children and grandchildren, including her two late sons, Will and Philip.

A word that Koch loves is “believe.”

JASPER — A suspicious vehicle complaint at a local hotel resulted in the arrest of an Evansville man for multiple drug related charges.

According to information obtained from the Jasper Police Department, on Tuesday, Dec. 6, officers were dispatched to the Days Inn regarding the suspicious vehicle. Upon arrival, officers utilized K9 Officer Mack, who performed a free air sniff of the vehicle and indicated the odor of narcotics within.

A search of the vehicle located marijuana, while a syringe was located in the parking lot near the vehicle. The contents inside the syringe tested positive for heroin. Upon a thorough investigation, officers determined the narcotic drug belonged to the driver, Joseph Buchanan, 54, Evansville. Buchanan was taken into custody and booked into the Dubois County Security Center on preliminary charges of possession of a narcotic drug, possession of a syringe and possession of marijuana.

A male passenger in the vehicle, Timothy Cheany, was cited into Dubois County Court for possession of marijuana.

JASPER — A welfare request at the Sunset Citgo gas station on Friday afternoon resulted in the arrest of a Huntingburg woman for a variety of drug charges.

According to a press release from the Jasper Police Department, officers were dispatched to the scene in the 1200 block of Third Avenue around 4:30 p.m. in reference to a female slumped over the steering wheel of a vehicle.

A search resulted in the location of methamphetamine and three separate controlled substances. After receiving medical clearance from Memorial Hospital, Junia Kay Pfaff, 60, Huntingburg was taken into custody and booked into the Dubois County Security Center on preliminary charges of possession of methamphetamine and three counts of possession of a controlled substance. 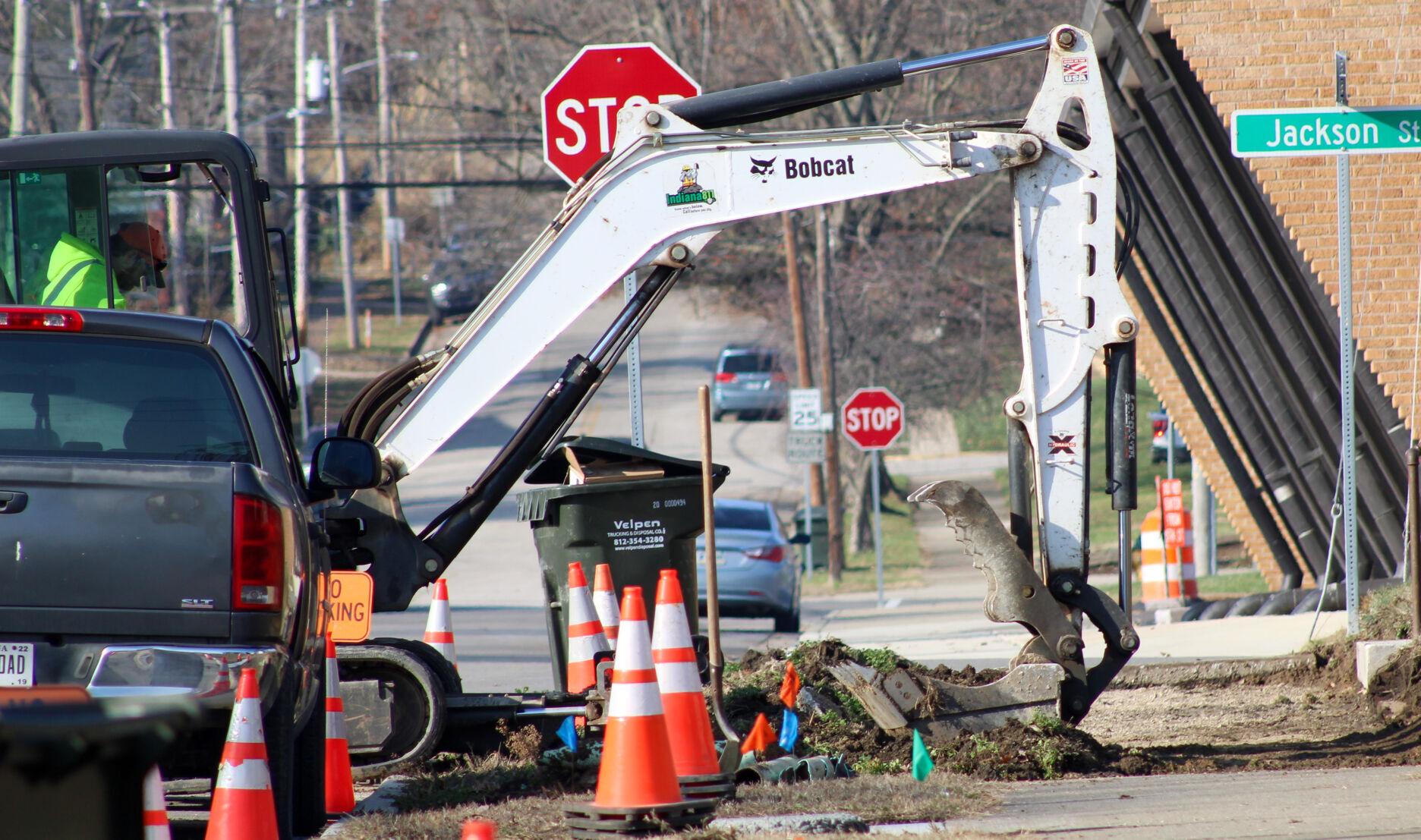 Work by the City of Huntingburg Street Department on Monday morning was focused on removing existing sidewalk at the corner of Fifth and Jackson streets in preparation of new sidewalks.

JASPER — A local man was arrested in the early hours of Sunday morning for driving under the influence and never being licensed.

According to information obtained from the Jasper Police Department, a JPD officer observed a vehicle cross the center line several times while traveling north on Newton Street. After conducting a traffic stop, the officer determined the driver, Edgar Castro Guzman, 36, Jasper, showed signs of intoxication. The officer also found Guzman to have never received a license.

A chemical test was conducted, in which the driver tested with a .12 BAC. Guzman was taken into custody and booked into the Dubois County Security Center on preliminary charges of OWI and operating with never receiving a license.

Click and hold your mouse button on the page to select the area you wish to save or print. You can click and drag the clipping box to move it or click and drag in the bottom right corner to resize it. When you're happy with your selection, click the checkmark icon next to the clipping area to continue.