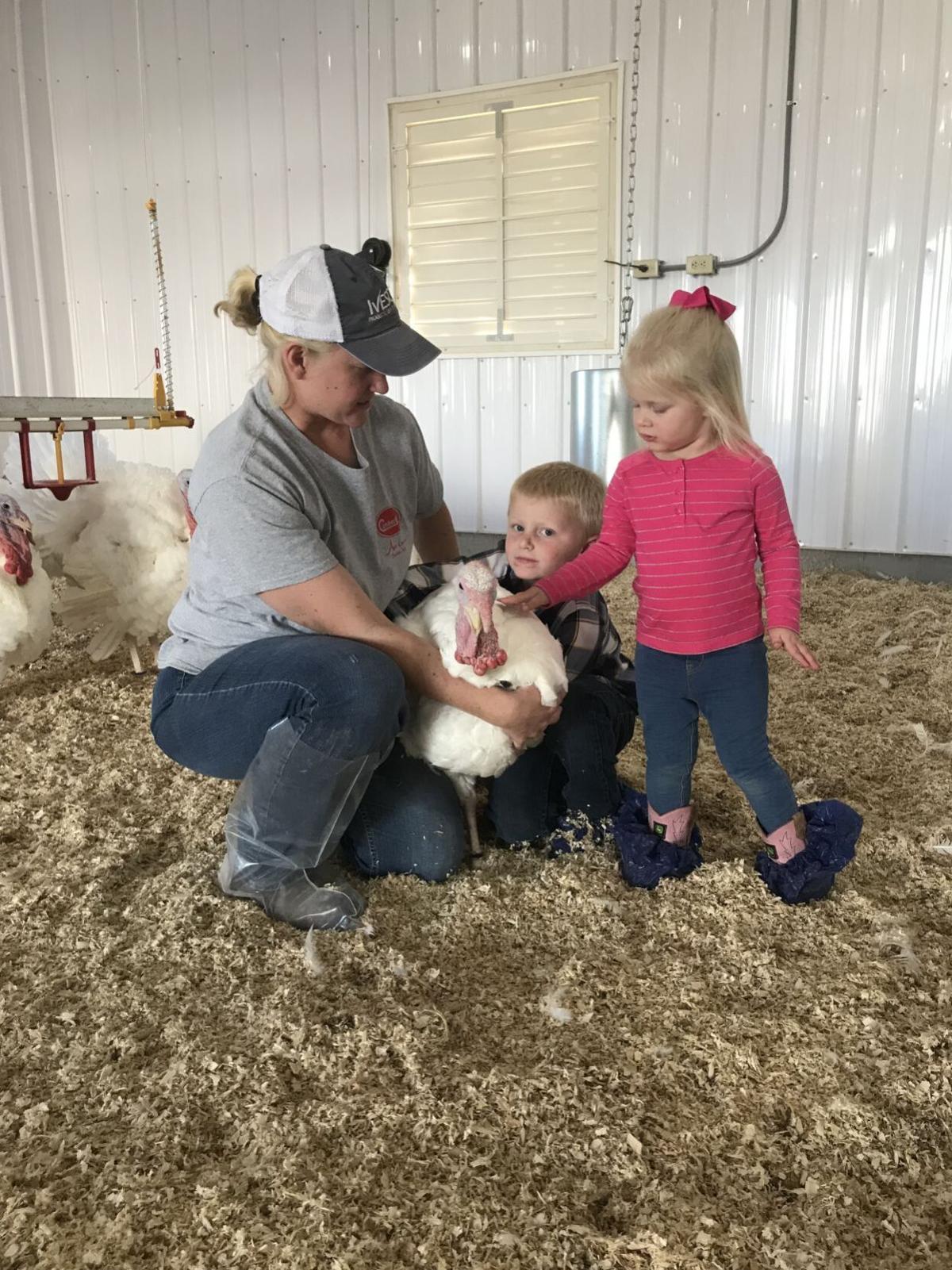 Andrea Welp and her children, 5-year-old Benton and 2-year-old Brogan, worked with one of the two turkeys that would ultimately be pardoned. 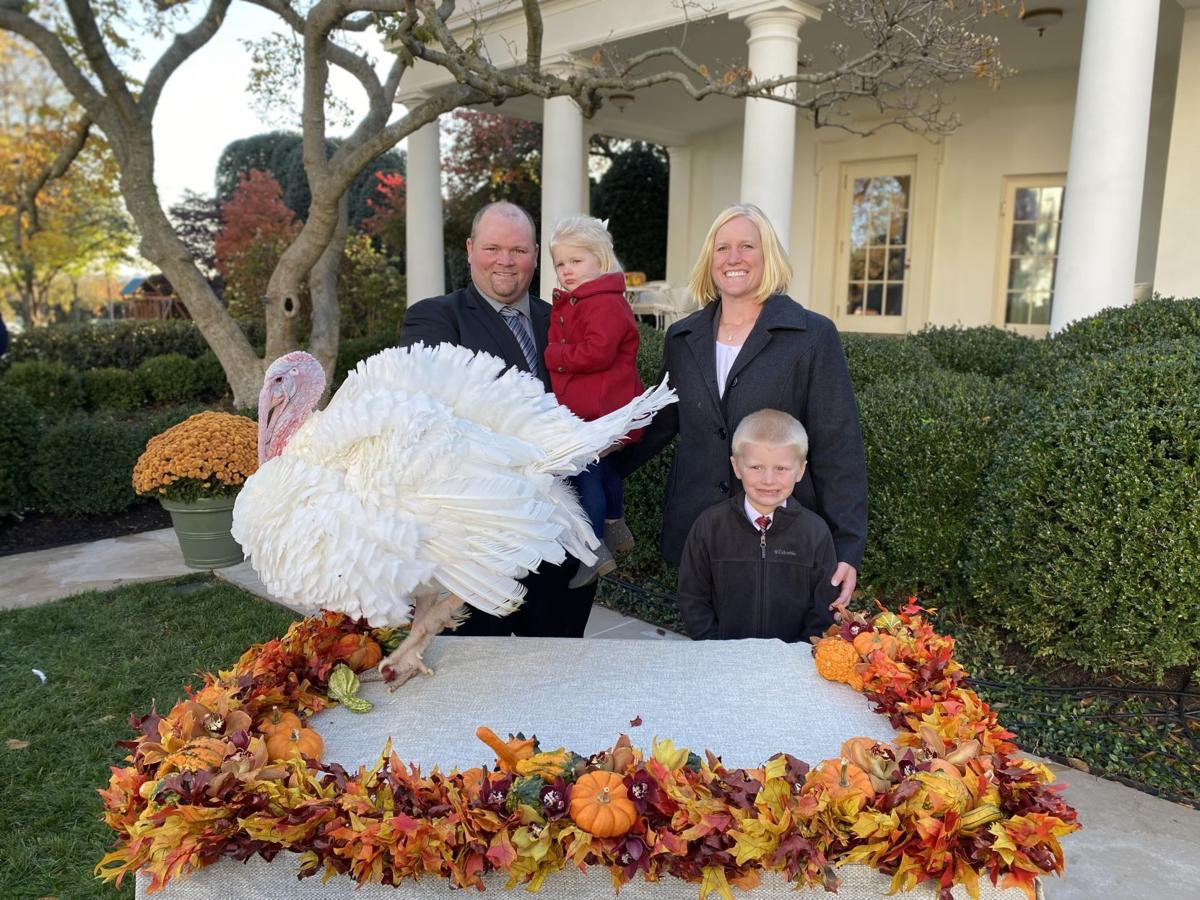 Brad, 2-year-old Brogan, Andrea and 5-year-old Benton Welp stood with one of the pardoned turkeys in the Rose Garden at the White House. 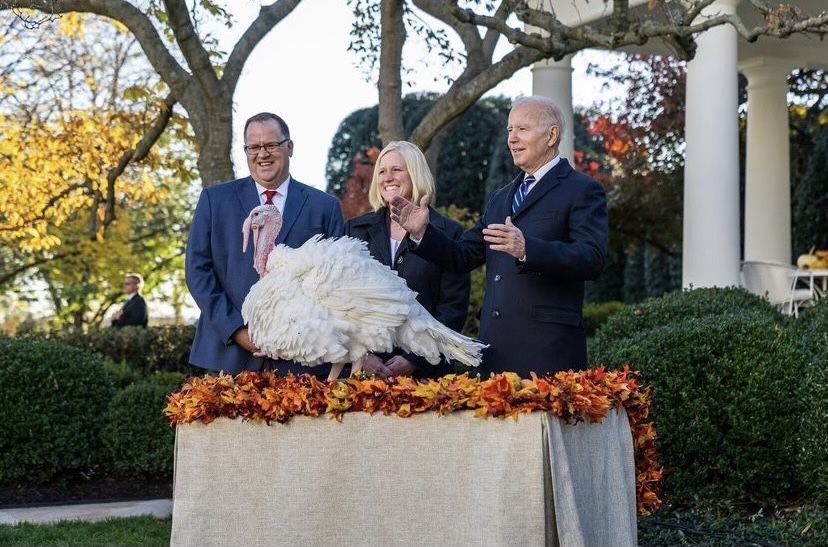 Phil Seger (left), vice president of live operations at Farbest Farms and the current chairman of the National Turkey Federation, farmer Andrea Welp and President Joe Biden stand with one of the two turkeys that were pardoned.

Andrea Welp and her children, 5-year-old Benton and 2-year-old Brogan, worked with one of the two turkeys that would ultimately be pardoned.

Brad, 2-year-old Brogan, Andrea and 5-year-old Benton Welp stood with one of the pardoned turkeys in the Rose Garden at the White House.

Phil Seger (left), vice president of live operations at Farbest Farms and the current chairman of the National Turkey Federation, farmer Andrea Welp and President Joe Biden stand with one of the two turkeys that were pardoned.

Andrea Welp had never thought that she would one day be before a U.S. president presenting two turkeys that she raised.

Raising turkeys on her Kyana farm was just something she’s always wanted to do. She is the third generation in her family to farm.

“Growing up on my family’s farm definitely sparked my passion for farming,” she said.

That passion led to a once-in-a-lifetime opportunity on Nov. 19.

Andrea stood in the Rose Garden at the White House that day, presenting two turkeys, Peanut Butter and Jelly, to President Joe Biden for the annual turkey pardon. And fun fact: she was the first woman to ever raise the turkeys for the presidential pardoned.

“The experience that I had in D.C. was awesome,” Andrea said from her home in Kyana, which is just east of St. Anthony. “I’m truly honored that I was chosen. The whole process will definitely be something to remember for a long time, and will be a highlight of my career for sure.”

Andrea lives on her family farm with her husband, Brad, who is a fifth-generation farmer. They farm together, raising turkeys, hogs and cattle and growing corn, soybeans, and wheat.

“I mainly take care of the turkey operation and Brad mainly takes care of the hog operation,” she said. “We usually work together on the crops and cattle.” They have two children, 5-year-old Benton and 2-year-old Brogan. Her parents, Stan and Brenda Stetter, live next door.

As a kid, her dad and grandfather raised cattle, hogs and crops. “Even though we didn’t raise turkeys on our farm growing up, I used to go help my aunt and uncle on their turkey farm during the summer months,” Andrea said. “That’s probably were my dream of owning my own turkey farm one day came from.” Her one and only sibling, Sarah Gehlhausen, did not get the farming bug.

After graduating from college, Andrea was hired by Farbest Farms as a flock supervisor. She did that for six years before she decided to pursue her dream of building her own turkey barns.

Andrea has been farming turkeys since 2014, when she built three contract grow-out barns for Farbest Farms. In what Welp calls her medium-sized operation, she raises about 90,000 turkeys per year.

A typical day on the turkey farm starts with walking the birds, after she gets her kids ready for school and the babysitter. “I basically am walking though the barns,” she explained, “making sure they have the proper ventilation (air quality), good quality feed and fresh water is available 24/7, litter is nice and dry and loose, and that the birds are healthy and happy.”

Almost everything in the barns is automated, she said, so “I need to make sure that all that technology is working properly for the barn to be running smoothly.”

She then moves on to working with the cattle or crops, depending on the time of the year. In the evening, Andrea goes back to do a walk through the turkeys again to make sure everything is still operating smoothly and correctly.

Andrea and Brad are happy to be able to raise their children in an environment very similar to how they were raised. “The farm is a great place to raise a family,” she said. “ It teaches my kids a strong work ethic from a young age.”

But the farming life does have its challenges, she said. “Some days, you have lots of equipment breakdowns and you just don’t seem to get anywhere,” she said. “But that’s part of the job.

One of those rewards this year was being part of the presidential pardon. That opportunity came through Phil Seger, vice president of live operations at Farbest Farms and the current chairman of the National Turkey Federation. The federation provides the turkeys each year for the pardon, and he asked Andrea to provide the birds.

The process for readying the turkeys started in July. She placed 38 1-year-old turkeys in a special barn built for this process. And she worked with the lot every day, training them.

“They needed to be used to being around people, bright lights, and lots of different noises,” Andrea said. “So we played a radio in their barn every day with different types of music. We interacted with them several times a day and even hosted a couple school fields trips.”

For the last four weeks, she placed each turkey on a table once a day, to make sure they were comfortable with that kind of handling. “I knew that at the pardoning ceremony at the White House I would be placing them on a table for the President to pardon,” she said.

Andrea was also monitoring the turkey’s mannerisms, to determine which ones would be the best candidates for the ceremony. “From early on, I already had two frontrunners that just seemed to ‘act the part,’ ” she said. “So those two turkeys got to receive the royal treatment in Washington D.C.”

Those frontrunners are now known as Peanut Butter and Jelly. The duo arrived in D.C. Wednesday, Nov. 17 and were given the red carpet treatment. They were checked into the Willard Intercontinental Hotel as guests and taken to their own hotel suite. They, along with Andrea, were made their public debut at a turkey federation news conference on Thursday, Nov. 18.

Andrea and her family met President Biden in the Oval Office prior to the Nov. 19 pardoning. And at the ceremony, Andrea placed the turkeys on the table and stood next to President Biden as he made the annual pardon.

Other visitors from the Welps’ home state stopped by as well. U.S. Sen. Mike Braun made an appearance at the turkey pardon press conference, calling Peanut Butter and Jelly “the two luckiest turkeys in the country, maybe.”

U.S. Rep. Larry Bucshon, who represents Dubois County in Congress, welcomed Peanut Butter and Jelly to the nation’s capitol. “Some may say that I’m biased,” he said, “but there’s no doubt that Indiana’s Eighth District has the best turkeys in the country,.”

On Saturday, Nov. 20, Peanut Butter and Jelly were taken to Purdue University in West Lafayette to live the rest of their days under the care and supervision of trained veterinarians and staff members.

And Andrea returned to her home with her family, cherishing the entire experience she and her family shared with each other and with the entire country.

“It was just a fun, lighthearted event that kind of kicks off the holiday season,” she said. “And everyone was so excited to see the turkeys.”